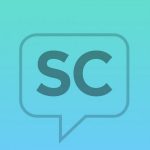 In celebration of Healthy Skin Month, we had the opportunity to chat with Tracy Callahan, founder of the Polka Dot Mama Melanoma Foundation. From blogging to fundraising galas to free mobile skin checks, she has turned her experience with melanoma outward to become a powerful advocate for others. In this segment, we discuss the lack of education around skin cancer and the shock of an unexpected treatment. Stay tuned for more of Tracy’s journey!

Nina: Have you encountered misunderstanding about what skin cancer means?

Tracy: Absolutely. I can tell you, especially with the scar on my face, on average two to three times a week I forget it’s there. But two to three times a week someone in public will ask me, “Oh did the dog scratch your face? Oh you have lipstick on your face!” They’ll remark about it, and if they’re going to comment, they’re going to hear, “Actually I had melanoma skin cancer on my face and I’ve had it three other times.” The instant reaction 90 percent of the time is “Oh yeah yeah, I had something cut off or my mom did.” People don’t understand. They say, “Oh but you’re fine, right?” Well yeah, I’m fine, but I’ve had ten wide excision surgeries and I go to a melanoma specialist every three months. I’m fine, but it’s minimizing, they don’t think of it as a threat.

Nina: We had a member who went in and expected two or three stitches – she ended up with 13. Nobody talks about what can happen.

Tracy: Well exactly! I went in for my second wide excision surgery. It was on my ankle, and I had Mohs on it. I had to have a flap. I went to one of the top surgeons in the country and he was great, he’s done three of my Mohs surgeries, but nobody prepared me. I ended up with a flap and 64 stitches and this Unna boot. I couldn’t walk or drive. Here I have two young kids and my husband’s a physician. We had to get my mother on a plane and fly her in urgently.

It was that lack of education. I had no idea – it was three millimeters – I thought how bad could it be! It was the same with my arm, and by the time my face rolled around you’d better believe I had the troops lined up.


I took a really dear friend in for Mohs surgery for a basal cell. I did my best to walk her through everything. Even after all that, she walked out after he did her flap – she looked at me and said, “I have 17 stitches, and it was the size of a pimple!” She was shocked even though I was telling her what to expect. I don’t think she really heard it, I think she thought it’ll just be a couple stitches. If we talked about it more, it might not be so shocking.

Nina: I always wonder, is it us who don’t consider the real impact, or is it a lack of warning from the physician?

Tracy: I think it’s some of both. That’s part of what we do with the skin cancer screenings. Many times we’ll find things, and have to refer, but we’ll start talking to them then and there. We feel that it’s really important, given my experience and the experience of the nurses we work with. We’re not trying to scare the patients but we want them to be prepared. It’s better to be over-prepared and pleasantly surprised than arrive with a 3mm mole and 64 stitches later…you can’t walk or drive! At 40 years old that’s a monkey wrench in my life.

The other little piece is that yes, I’ve had four melanomas but I’ve also had six severely dysplastic moles that they treat the same way as they treat a melanoma. I’ve had ten wide excision surgeries, and well over 40 biopsies – I’ve lost count. Again, things people aren’t prepared for. 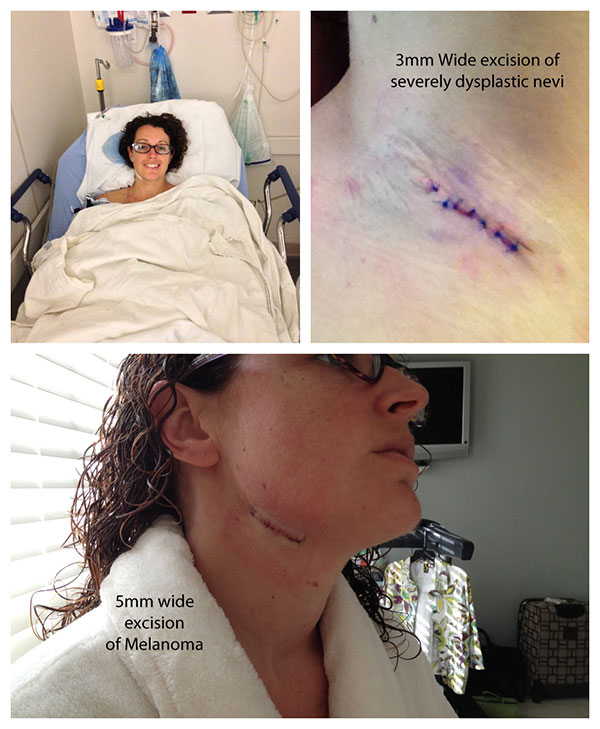 Nina: With a lot of conditions, there are methods of detection without surgery and scars, but with skin cancer it can feel like an endless chopping.

Tracy: It is. I’m lucky that I have a very highly skilled dermatologist who has mole mapping and her hit rate is one in three to one in four. But boy, some derms, their hit rate is one in ten. Imagine how many more biopsies…take someone like me who’s a dartboard! I have very weird-looking moles.

Nina: How did you figure out what the hit rate is?

Haha well, I actually counted the number of biopsies she’s done and how many have come back needing surgical intervention. What’s interesting when we do the screenings is that some of the dermatologists that we work with will tell you what their hit rate is, so they know. And one in four is considered good, but if you’re seeing someone with a low hit rate, you might want to consider getting someone else.

Tracy: I think if we stop having so much stigma around this type of cancer, people could talk about it more, and we could really prevent or diagnose earlier. There are so many times people think, “It’s just a mole. I don’t have time to take care of it.” Nobody wants to talk about sunscreen, skin cancer, stitches and wide excisions – it’s not glamorous, it’s pretty disfiguring. If we could just break down those barriers and talk about it, we’d be in a different place.

Thank you to everyone who shares their story, and thank you to Tracy for sharing hers!