After working as a community lead on SkinCancer.net for a few months, I decided it was definitely time for a skin check. Reading about the risks and effects of skin cancer every day can really light a fire under you. I won't even admit how long it had been since my last appointment. I scheduled an appointment with a nearby dermatologist and surprisingly, didn't have to wait long. The skin check was quick and easy. Maybe too easy?

While I'll admit I've become slightly paranoid about my skin, I truly felt the skin check was not thorough enough. It felt rushed and I had forgotten to point out a few specific moles that have changed over the last couple of years. I have thousands (okay, I'm exaggerating) of moles and freckles and was concerned the dermatologist didn't get a close enough look at some of them. After sitting on it for a few months, a friend recommended another local dermatologist. Calling the office kept falling off of my to-do list, but I finally made a second skin check appointment.

This dermatologist did a much more thorough exam and I was prepared with notes about every spot and mole I was concerned about. She said most of the spots I pointed out were not a cause for concern - one was even just a popped blood vessel. But she found two moles that raised red flags. One was a dark mole on my shoulder, that I knew might be trouble. The other was a small asymmetrical mole on my back that I wasn't even aware of. 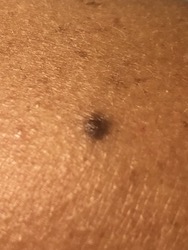 The dermatologist wanted both moles biopsied to look for atypical cells. She injected local anesthetic into each mole to numb it. It stung a little but I didn't feel a thing when she scrapped off either one. Both spots were a little sore later that day, but not bad. She directed me to refresh a band-aid with Aquaphor each day, stating that some people think the spots should dry and scab but that is how you get more pronounced scarring.

She explained that they categorize the results by 'mild', 'moderate', and 'severe' - based on the volume of atypical cells. 'Mild' was the best-case-scenario and required no further action but ongoing monitoring. 'Moderate' or 'severe' would require surgery and testing.

The office called about a week later with the results. The one on my back came back as 'mild', and no further action was needed. But the one on my shoulder came back 'moderate' and would require an excision surgery to ensure they get the atypical cells that could turn into precancer cells. I've had an excision surgery once before which left me with a large, not-so-pretty scar on my leg, so I wasn't too excited to have the same scar on my shoulder. However, having a scar is a much better alternative to skin cancer!

At this appointment, the dermatologist drew out the excision lines and injected quite a bit of local anesthetic. The injections stung for a moment but weren't terribly painful. I didn't feel any pain during the excision and I certainly did not watch the procedure. I was pretty sore for the remainder of the day and had to be careful not to lift my arm too high for the 2 weeks I had the stitches. In the end, I have about an inch and half scar (which is still pretty new) but I know it will continue to heal.

So, even though I ended up with a couple of scars from my second opinion, I'm very relieved my dermatologist was thorough and spotted these areas. I'd much rather address trouble areas now than deal with advanced skin cancer later!

Please schedule regular dermatologist appointments for your own health, and encourage loved ones to do the same! And if you aren't satisfied with the results of your skin check, go with your gut and seek a second opinion.