My Journey with Efudex in Photos

Front Range Dermatology Associates provide a list of instructions for applying Efudex and hints for aftercare. In addition, their information sheet briefly mentions a few common symptoms. I am including the link to their instructions as means of comparing their suggestions to my journal of experiences.

My Efudex journey through pictures: 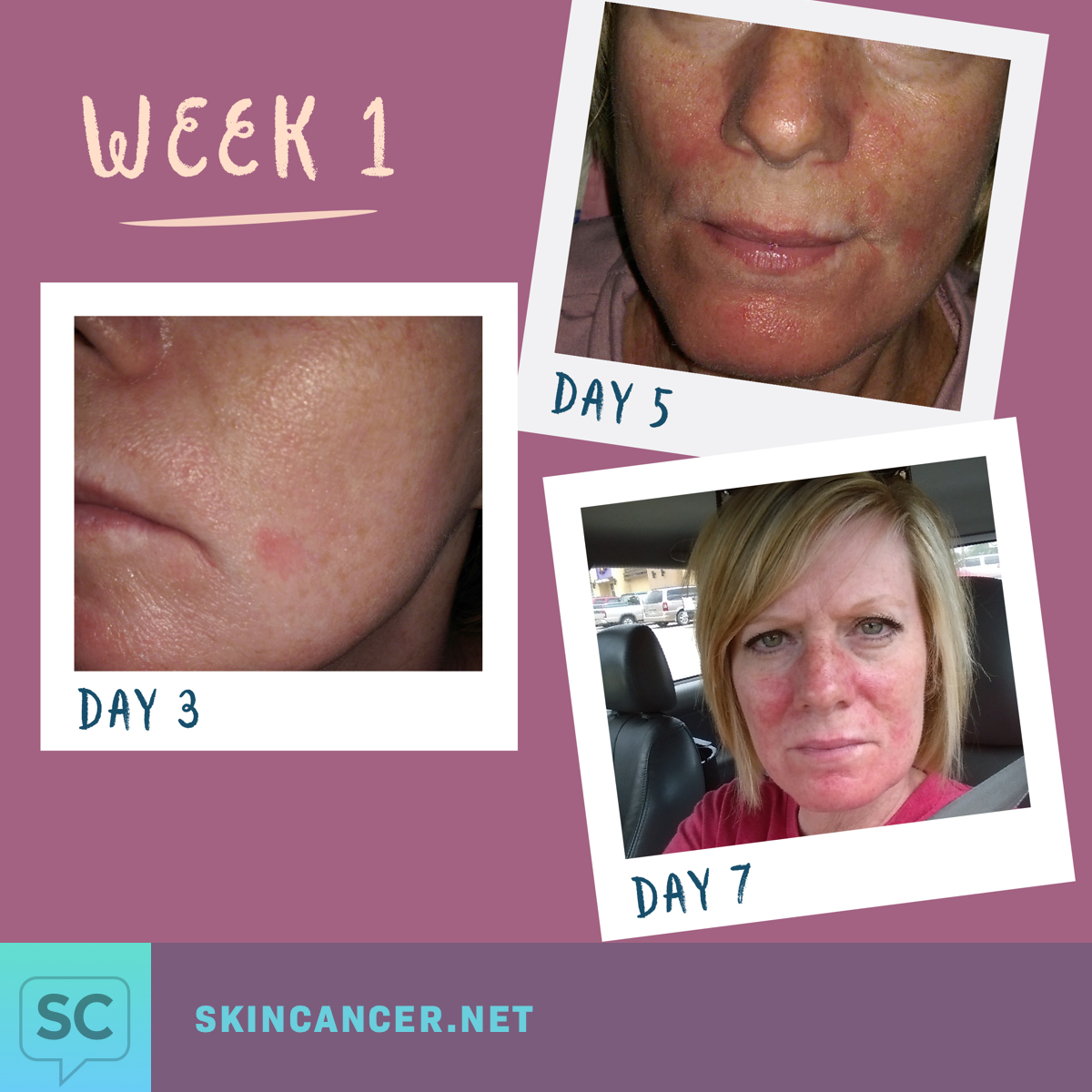 Day 1 (June 24) No visible reaction. Sensation that something is different. No pain.
Day 2 (June 25) Same as Day 1. Headache. Stomach slightly upset. Fatigued late in the day.
Day 3 (June 26) A little redness around spot on lower left cheek. No pain. No itching. Stomach upset. Fatigued late in the day.
Day 4 (June 27) Discomfort around nose in the crease and over top lip. Chin itchy. Bright red spot beginning to show left side of mouth. Nothing to speak of on nose. Irritation on right side of cheek near nose where I saw a scaly spot.
Day 5 (June 28) More discomfort around creases of nose. Chin itches some. Two prominent bright red spots on sides of mouth and nose. Small red spot showing up on left side of nose. Overall still not inflamed or swollen. Headache and stomach upset.
Day 6 (June 29) Basically same as Day 5. More general redness and beginning to feel tight when cream is cleaned off.
Day 7 (June 30) Stomach upset. Headache late in the evening. General discomfort spreading. Overall redness spreading. Painful to smile or open mouth to chew. 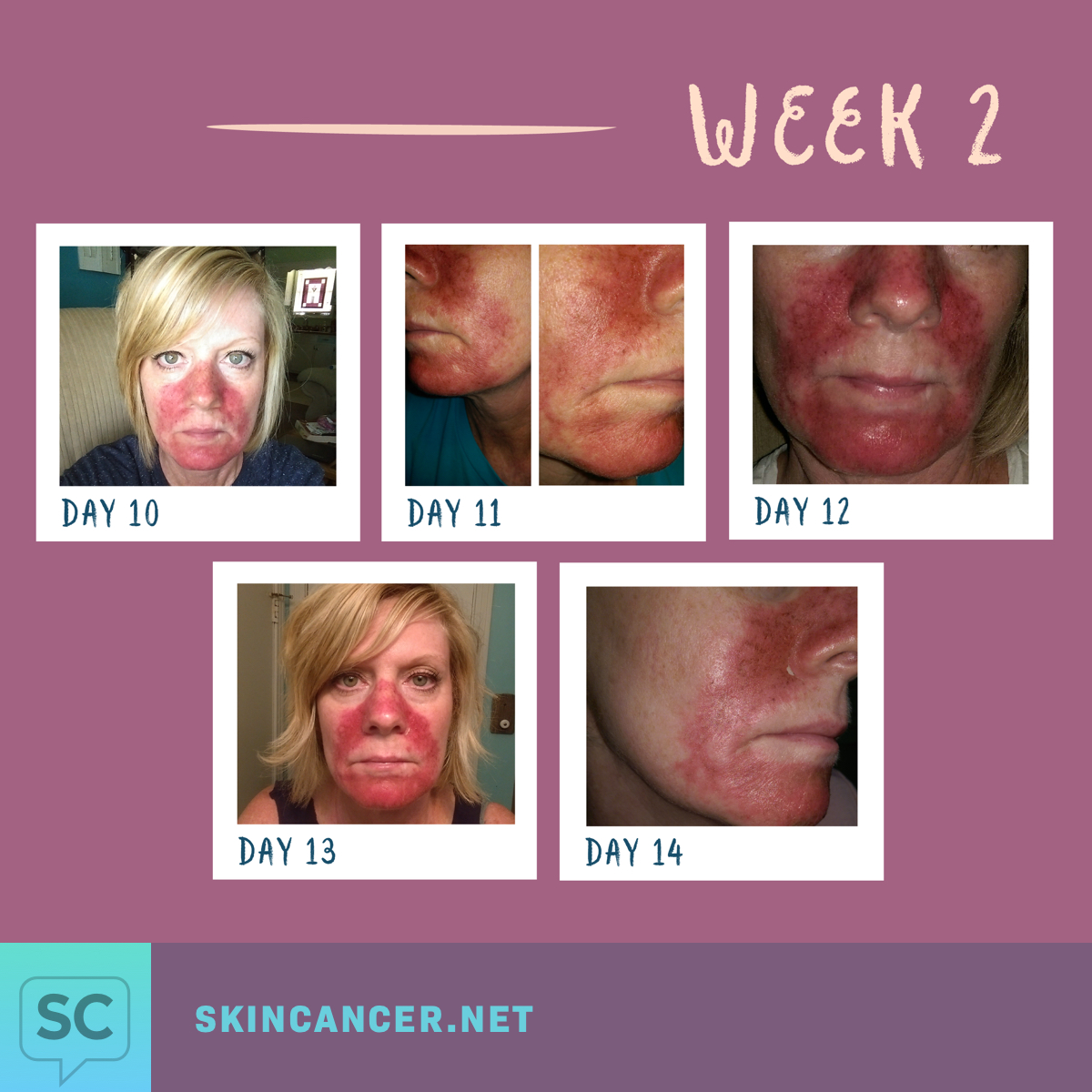 Day 8 (July 1) Lots of stomach upset. Aware of the discomfort all the time. Itches late in the day. Water feels good in shower but immediately feels dry. Mouth feels dry. Slight metallic taste. Headache woke me early this morning. Nagged all day even with Tylenol.
Day 9 (July 2) Stomach upset. Face tightening.
Day 10 (July 3) Stomach upset worsening. Strong metallic taste. Takes an hour for face to completely dry out after shower. Even then it stings to reapply.
Day 11 (July 4) Skin is very tight. Stomach upset was much better. Still have a metallic taste. Throbs horribly when I wash it off in the morning and after shower. I'm waiting about 30 minutes to reapply in the morning and over an hour after shower. Any sooner would be unbearable.
Day 12 (July 5) Face tight all day. Getting much harder to open mouth to eat. No cracking yet. No stomach upset.
Day 13 (July 6) Can't open my mouth much wider than to slide in my toothbrush. Had a headache most of the day.  Feels like it might be seeping a little after it’s washed. Skin becomes soft enough in the shower to open my mouth wide as I want but hardens almost immediately after it's dry. Stopped by doc and nurse looked at me. Says reaction is a good one and to try a couple more days at least.
Day 14 (July 7) Pretty much the same as Day 13 with more tightening. 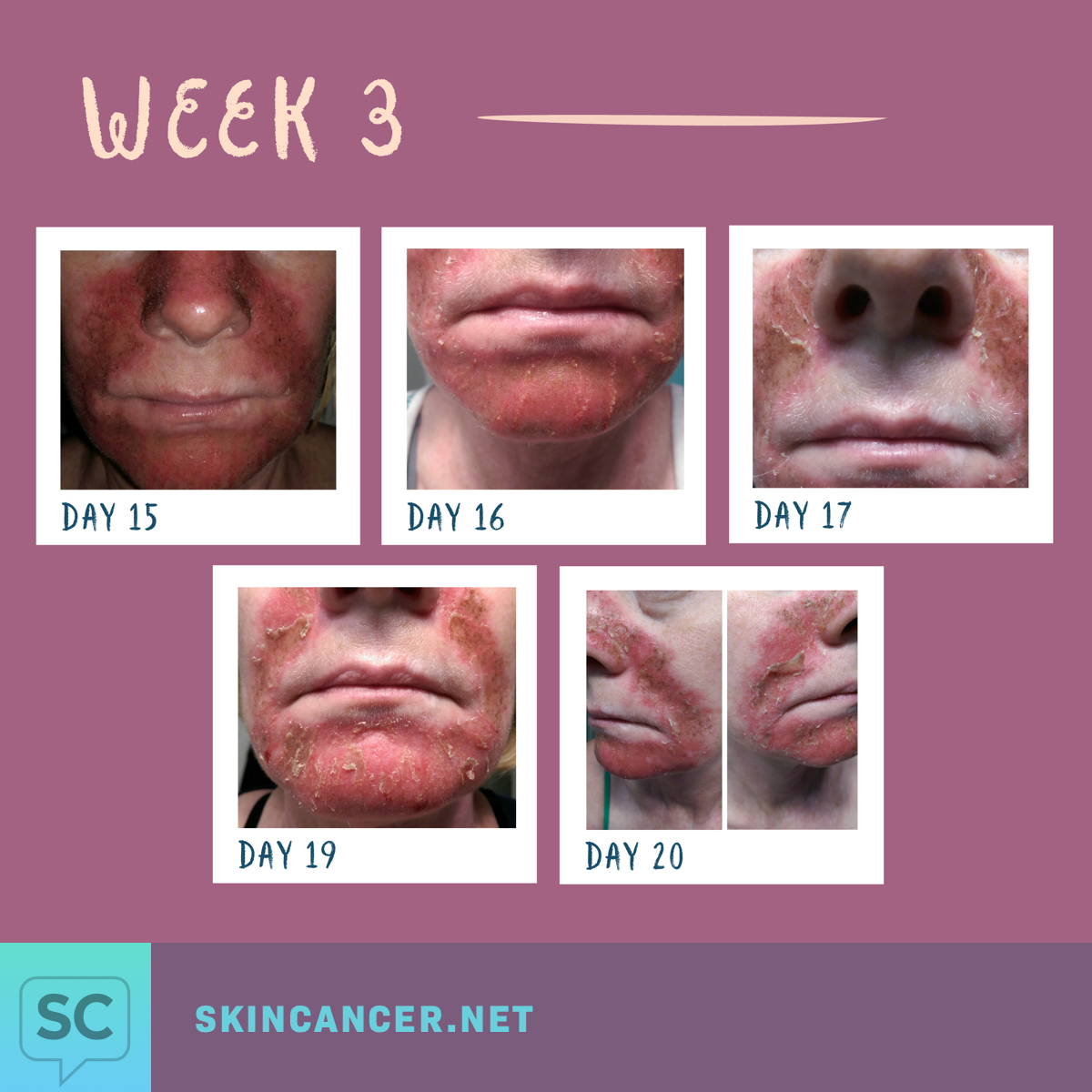 Day 15 (July 8) Very little sleep even with Tylenol PM or Benadryl. Itched and burned a lot through the night. Couldn't find a comfortable position even on my back. I can't tell, but it feels like my face is beginning to sleep at night. I don't see evidence on pillow and I'm not able to wipe away any wetness but face feels cool as if it's wet in places. Extremely tight late in the day and several spots in nose crease and around chin are beginning to flake. Went to bed with worst headache yet.
Day 16 (July 9) Woke several times during the night. Got about 2 hours of sleep. Headache returned in the morning. I think I'm done. Bled in the shower a little. Very seepy after shower and after night application. Cracked and super dry. So tight I can barely open my mouth. Will wash in the morning and start recovery.
Day 17 (July 10) Day 1 post-application: Washed off night application. Waited two hours before using Vanicream. Stung horribly with first application of Vanicream. Headache persisted overnight and through morning. Lots of tightening throughout the day. Vanicream helps. Peeling begins.
Day 18 (July 11) Day 2 post-application: Woke with terrible headache. Slept better but had to take pain meds to do it. Woke at 3:30 to reapply Vanicream. Went right back to sleep. Very tight. Larger areas are beginning to lift but too stiff to peel and will bleed if pulled. 10 minutes after shower skin pulls incredibly tight. Took about two hours after shower to stop stinging. First application of Vanicream two hours after shower stings. Later in the night applying doesn't hurt.  A few ulcers forming inside my cheeks. Had trouble falling asleep. Got up twice to apply Vanicream.
Day 19 (July 12) Day 3 post-application: Very tight again all day. Most uncomfortable day post app so far. Large sections coming loose but still attached in places. Vanicream lotion helps a lot. I wasn't able to apply constantly all day because I was out for a few hours. The longer I was out and went without Vanicream, the more painful and dry I was. This seemed to make bigger chunks form though. Late in the evening I was able to work several large pieces loose and get them off by rolling and twisting. (If they are left too long they do begin to smell bad.) Shower felt good and I could move freely but tightening started about 10 minutes afterward. Some seeping still happening. Bleeding in a few small spots.
Day 20 (July 13) Day 4 post-application: Very hard day. I expected to be almost done peeling. For every spot that has peeled, more seeping has happened. Swelling in my cheeks, around mouth, and across chin. Tight after ice packs are applied and so tight after shower it feels like I'll split open and bleed.  Long after shower still tight and throbbing. Stinging.  Feels wet and looks dry and is dry to the touch from seeping having crusted over. Was extremely fatigued through the day. Didn't sleep soundly last night. Could feel seeping from chin. Used hydrocortisone instead of Vanicream and it also burned. Finally stopped after about 10 minutes. Seeping was somewhat less overnight. Slept hard in one position with pain med.
Day 21 (July 14) Day 5 post-application: Somewhat easier than yesterday. Washed after getting up and used hydrocortisone. Washed early afternoon and tried Vanicream. Both absorb very quickly.  Swelling in the afternoon and evening. So much stinging after shower I took pain pill early. Nose is almost completely peeled and smooth. Parts of cheeks are smooth. Both sides of nose and all of chin keep seeping and recrusting. Very frustrating. Chin is now tightest part making it hard to eat and talk. 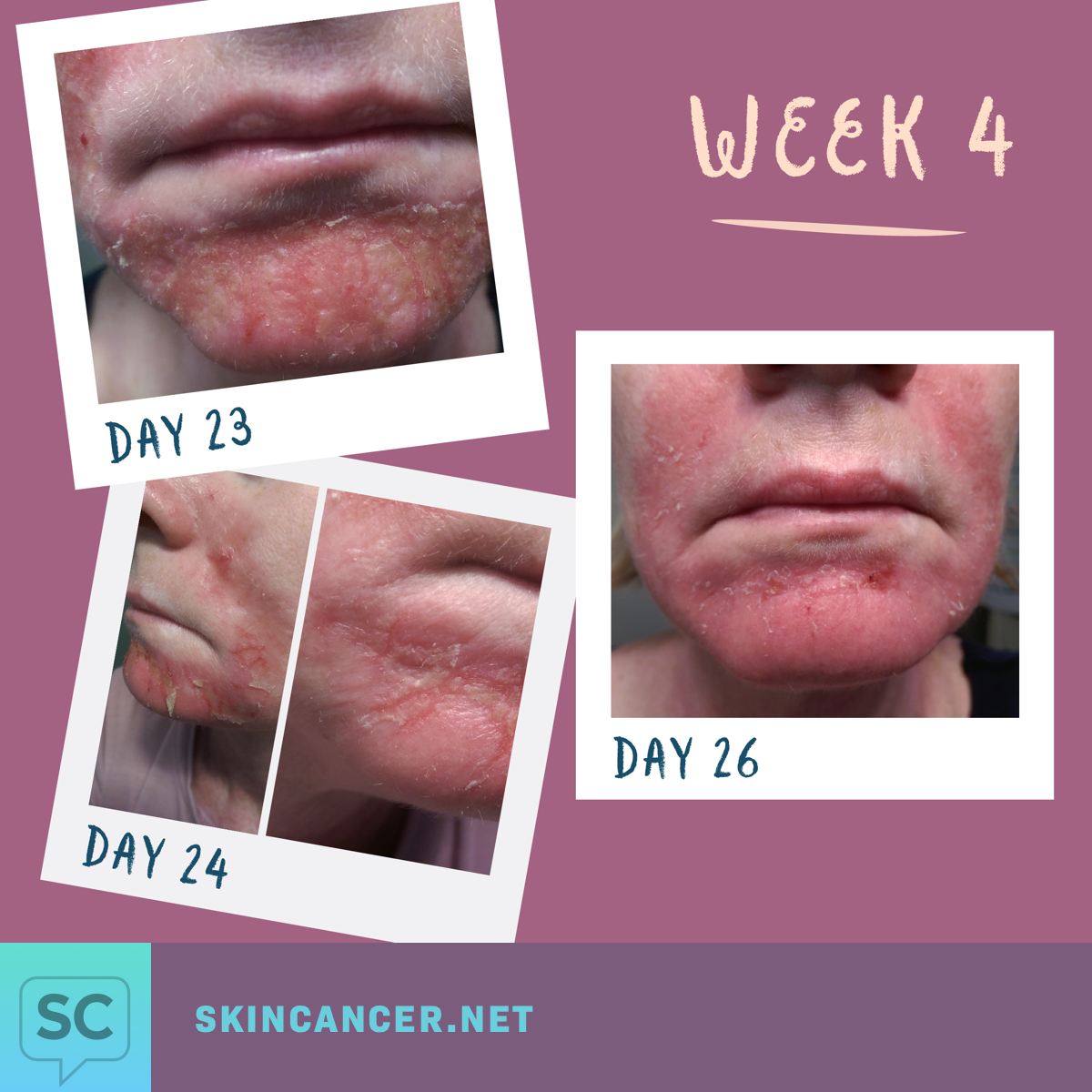 Day 22 (July 15) Day 6 post-application: Chin is still scabbed and very tight. The longer the day went on the more swelling I felt. Eating is still hard. Several spots cracked and bled. Stiffened after shower and stung horribly. I used Vanicream on left side of face and chin and hydrocortisone on the right side before bed. Vanicream stung much less. Hard to fall asleep. Woke a few times through the night.
Day 23 (July 16) Day 7 post-application: Chin is crusted. The spot I first noticed before derm visit on left cheek is tender and still scabbed. Small red spot right side of nose on cheek before derm is also scabbed. Nose is fairly clear.  Corners are almost clear.  This was first morning Vanicream didn't burn with first application. Rolled off a few pieces in shower. Stung after shower. Vanicream after shower stung as well. Noticed today I have a half dozen red spots that have appeared on my chest. They don't itch.  I’m just over it.
Day 24 (July 17) Day 8 post-application: Felt much better. Stiff cheeks and a little peeling beside nose and in the two trouble spots. Chin peeling quite a bit. The only pain is on chin. Able to eat larger bites of food.
Day 25 (July 18) Day 9 post-application: Ate normally. Slept well with Tylenol PM last night. No stinging this morning. A little stiff across cheeks and very center of chin under lip hurts if I stretch it. Got a lot rolled off chin in shower. Just a tad stiff after shower. Only spot that hurts at all is dead center of chin directly under my lip. Hard scab there.
Day 26 (July 19) Day 10 post-application: Scab under chin is smaller. Red area has faded and is a little smaller. No sleep meds. Eating normally with no pain.
Day 27 (July 20) Day 11 post-application: Scab almost gone.  The only sensation I have now is a little twinge when I stretch my mouth wide enough to yawn. Redness is fading.
Day 28 (July 21) Day 12 post-application: Sleeping normally. A little lingering headache. Redness is still fading. Last of the scab is gone. 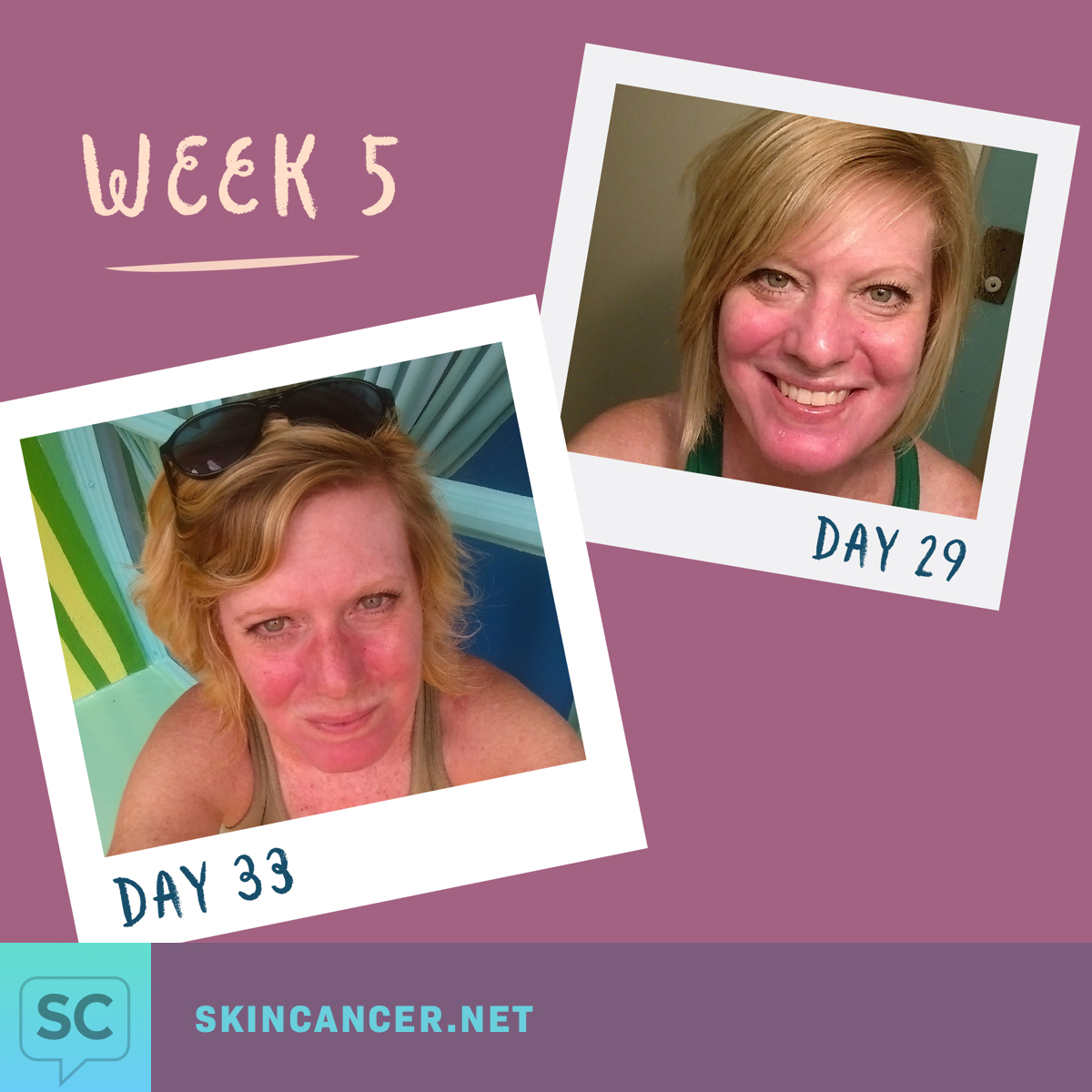 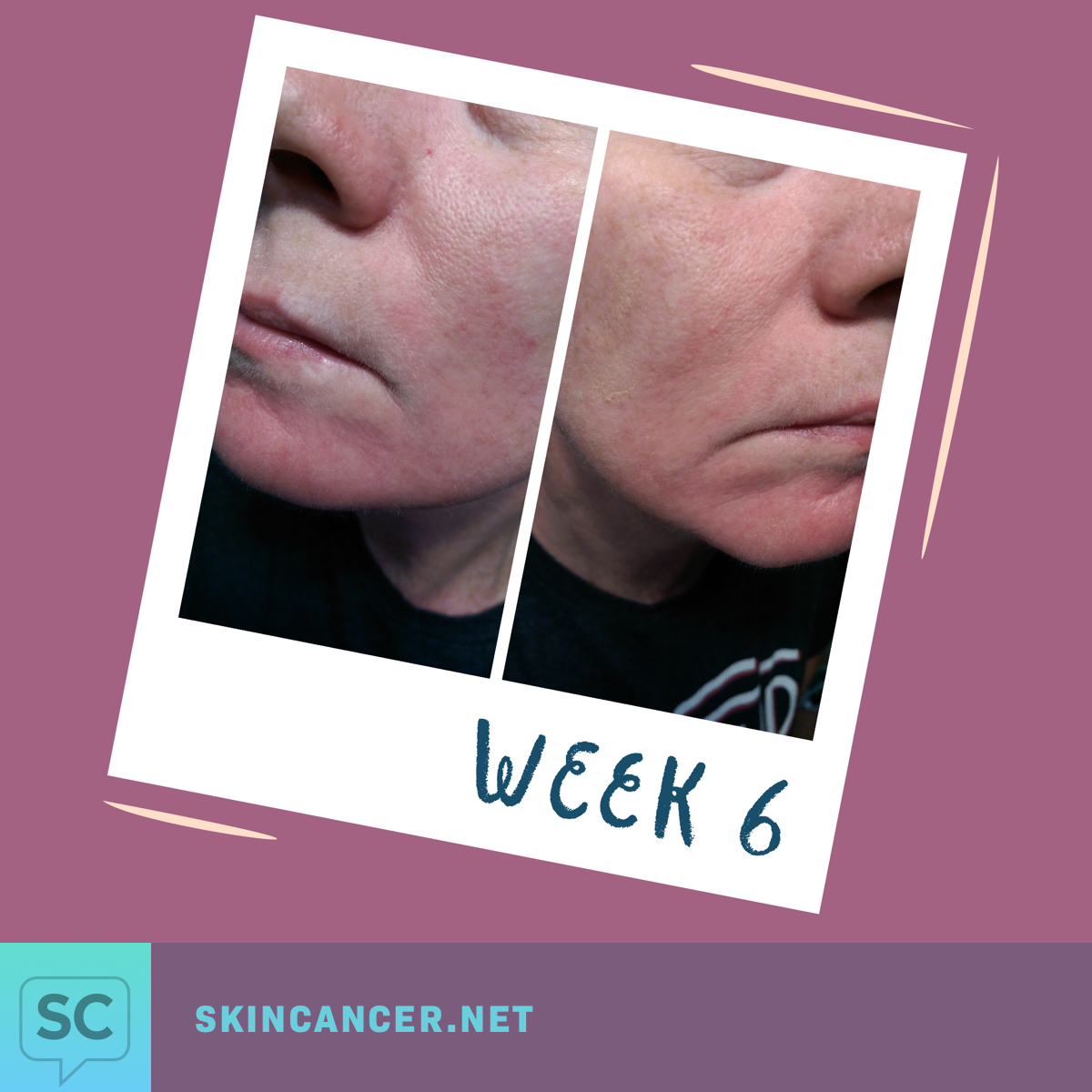 Using Efudex cannot be succinctly described, and no one can predict the results each subsequent treatment will produce. One Efudex user chronicled his experience and documented his results in photographs. He, unlike many others with whom I have talked, was duly warned by his doctor that the results during treatment could be quite horrendous. I have found that large numbers of Efudex patients are provided with little or no warning regarding the worst-case scenarios during and immediately following treatment. In fact, it seems quite common for dermatologists to compare effects to a “bad sunburn". My history of sun damage will lead me to remain vigilant with sunscreen use, sun safety, and regular self-checks of my skin. In my preteen years, I set the stage for a long string of events that will hopefully now prevent others from following my lead. Every difficult morning and each sleepless night spent using Efudex is worth the end result. Each time I have treated, my dermatologist has been pleased with the outcome. Areas of concern have been eliminated with new, healthy skin taking their place. Granted, skin cancer is a never-ending journey. New spots will continue to appear, Efudex will likely be prescribed, and I will repeat the process.

Fear of Recurrence? Not Me. Well, Maybe Me

Do you check the UV index before leaving the house?