Our Facebook community member, Mike Hyder, has been on a rollercoaster when it comes to diagnosing and treating his melanoma. He had various treatments done after the melanoma spread to several parts of his body. We asked Mike to share more about his skin cancer journey in this article.

The start of my diagnosis and treatment journey

In September of 2017, I went to my primary doctor to have a routine check-up, and I asked about a spot on the side of my face. He looked at it and told me not to worry. I decided I needed a second opinion, so I went to a dermatologist in my area. They took a core sample of the area and discovered melanoma, but they didn’t get the margins, so I had to have surgery. I met with a plastic surgeon and the doctor who would perform the removal of cancer from my face. They decided to remove a lymph node as well to be sure they got it. I left the surgery with 12 stitches across my face and a scar that will forever be present. I was thankful they got it all until October of 2019.

The melanoma was spreading

I had been doing regular check-ups and chest X-rays, and blood work every four months to ensure nothing has come back. I went to the oncologist in September when my cancer indicator in my blood dehydrogenase went from 174 to 214. Unfortunately, I was also diagnosed with diabetes because my blood sugar was in the 300’s. 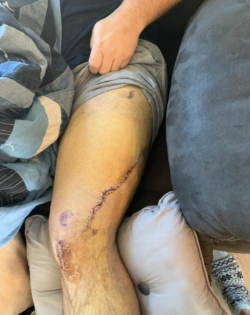 In October of 2019, I began having pain in my left leg. I went to my primary physician again who said that it was a pulled muscle and to take ibuprofen and ice and elevate. I did that for several weeks, and it only got worse. I made an appointment again in early November, and I was sent to get an MRI, where I found out that the melanoma had spread to my femur and had eaten a hole in my bone.

A few days later, I had to meet with the surgeon who was going to biopsy my leg to make sure we were dealing with was melanoma. I went into surgery, and they removed a piece of my femur for biopsy. In recovery, as I was getting ready to put my shoes on, I adjusted in the bed, and because of the weakened bone, my femur snapped in half. I was admitted into the hospital and had to wait a few days for my surgery to place a titanium rod and several screws. They closed my leg up with 63 staples.

While waiting, they decided to do a PET scan of my entire body to see if it had traveled anywhere else. I was in the hospital with my friends and family when the doctor came in and gave me the news. The melanoma was spreading and had moved into my pancreas, lungs, lymph nodes, and adrenal glands. The most prominent spot was in my pancreas, causing my blood sugar to skyrocket to the point I had to be put on 4X’s daily insulin injections.

I went to the hospital emergency room on January 5th because I got a case of hiccups that lasted over 16 hours. I was admitted because I had elevated liver numbers. I was starting to go into liver failure and turn jaundice. I stayed in the hospital taking antibiotics and immune-suppressing drugs to slow down my immune system. I was told I couldn’t leave the hospital until my numbers came down. In the meantime, I was rehabbing my leg while they’re walking up and down the halls going up and downstairs. And every day, they would come to me with the bad news that I couldn’t leave. I was stuck. I felt helpless.

Time to get aggressive with treatment

My oncologist came to tell me to make sure my wife was there on day 12 to tell me that I wouldn’t be able to go home and that I most likely needed to get my affairs in order. However, as we were talking that day, he said that I seemed more coherent than my liver numbers would indicate and that if he had only gone by the numbers, there is no way I would be able to leave. Since I looked good, he decided to send me home as long as I kept getting blood draws every day.

Gradually my numbers started turning around, but without any treatment, my tumors were growing. My pancreas tumor doubled in size and was now 7cm in just a month’s time. We had to get aggressive quickly, so my next best option was to do bio-chemotherapy for five rounds. This would mean that I would stay in the hospital for five consecutive days and have this drug administered 24 hours a day, so that's what I did. I wasn’t giving up no matter what this took out of me.

Figuring out what's next

As I was getting ready for the first round of treatment, COVID happened. They were not allowing visitors, and I was all alone during some of the scariest times in my life. I was able to facetime my wife, who helped tremendously.

During the third round of this treatment, I received some bad news that we had to stop the treatment because the pharmacist had mistakenly given me the wrong Chemo drug! It seemed that everything we tried, something happened to get in the way. I took scans again to see where we were, and the tumor had stopped growing.

I had to make a choice to try the immunotherapy drugs (that almost killed me) one more time. I started this program in April of 2020, and would go in twice a month and go through the infusion. I would have my blood checked every other day to see if there was anything going on with my liver numbers. All was steady, with no increase in my blood work. So we continued on this path.

On July 6th, I received a text from my oncologist nurse practitioner. It said, “text me back when you can. I have good news!” I called her back, and she said that all my tumors were gone. They were not visible on my scans. I couldn’t believe it, so I didn’t tell anyone until I met with the doctor that following Monday.

I have continued to do treatment to this day and have just recently had my 3rd set of clear scans. I am planning to end my treatment in October after my 4th set of scans. Since I have had clean scans, my sugar numbers are back down within the normal range.

Cancer changes your outlook on life

Cancer has changed my life, both physically and emotionally. I think about it every day, in some capacity. I worry that it will come back, so I try to live my life to the fullest at least while I still have it. It changes the way you look at things.

Stay positive, be nice to the hospital staff, trust your gut. It’s your body. Only you know exactly how you feel. Don’t let anyone tell you how you feel or should feel. Fight like hell!

5 comments
This article represents the opinions, thoughts, and experiences of the author; none of this content has been paid for by any advertiser. The SkinCancer.net team does not recommend or endorse any products or treatments discussed herein. Learn more about how we maintain editorial integrity here.