Melanoma cells spread via the lymphatic system. Lymph is a fluid that contains white blood cells.1 Lymph travels through the body via lymph vessels.2 Lymph nodes are clusters of cells that filter the lymph, removing bacteria and other harmful substances.

Once melanoma has grown into the dermis layer of skin, it can enter the lymph vessels.3 If the cancer has started to spread, the closest lymph node is the most likely place to find it. Another term for the spread of melanoma to the lymph nodes is “regional metastasis.” 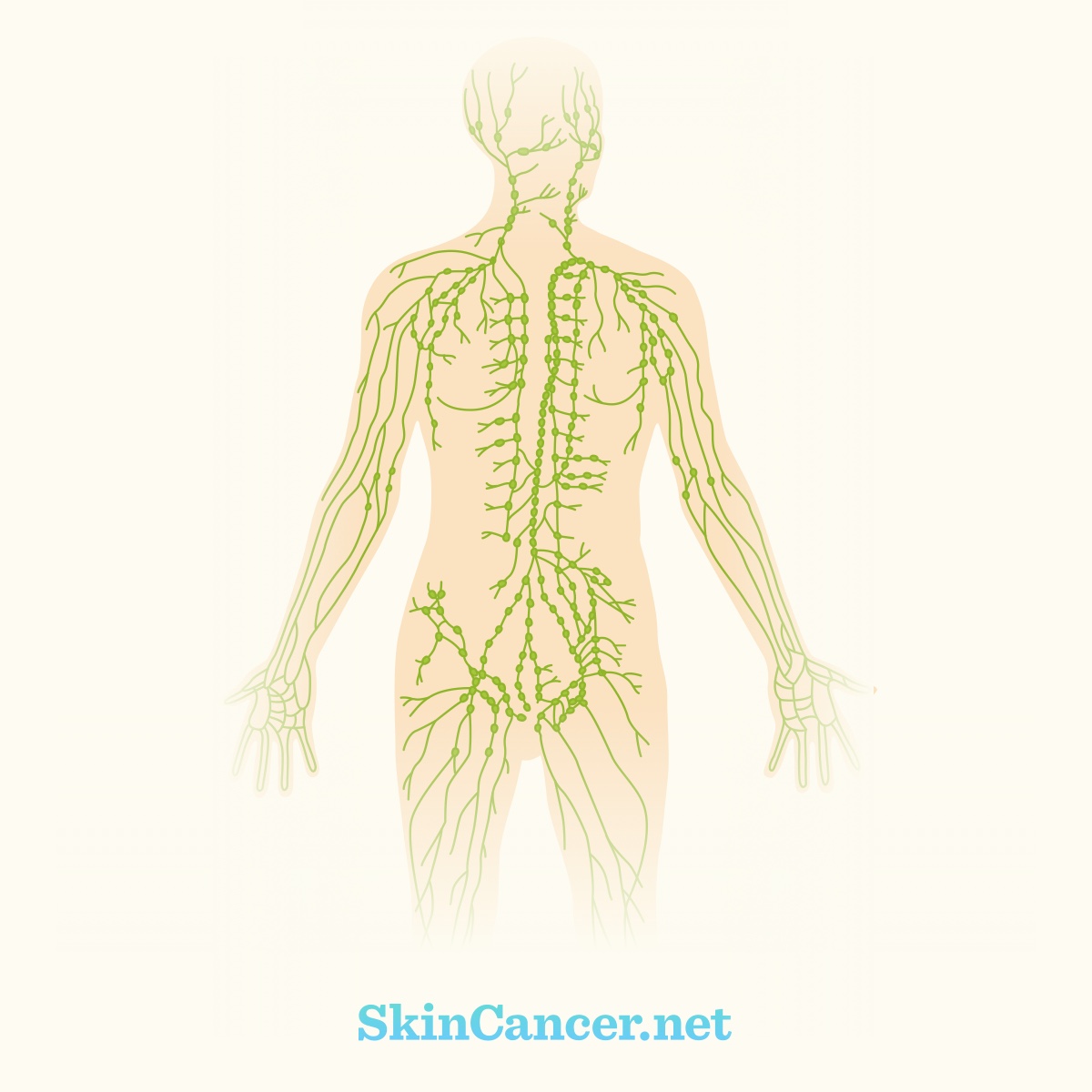 When is a lymph node biopsy needed?

The absence of lymph node symptoms does not rule out the spread of cancer. It is possible that the metastasis is so small that it can only been seen under the microscope. The term for this is micrometastasis.5 Based on the thickness of your tumor, your doctor might recommend a sentinel lymph node biopsy.4,6 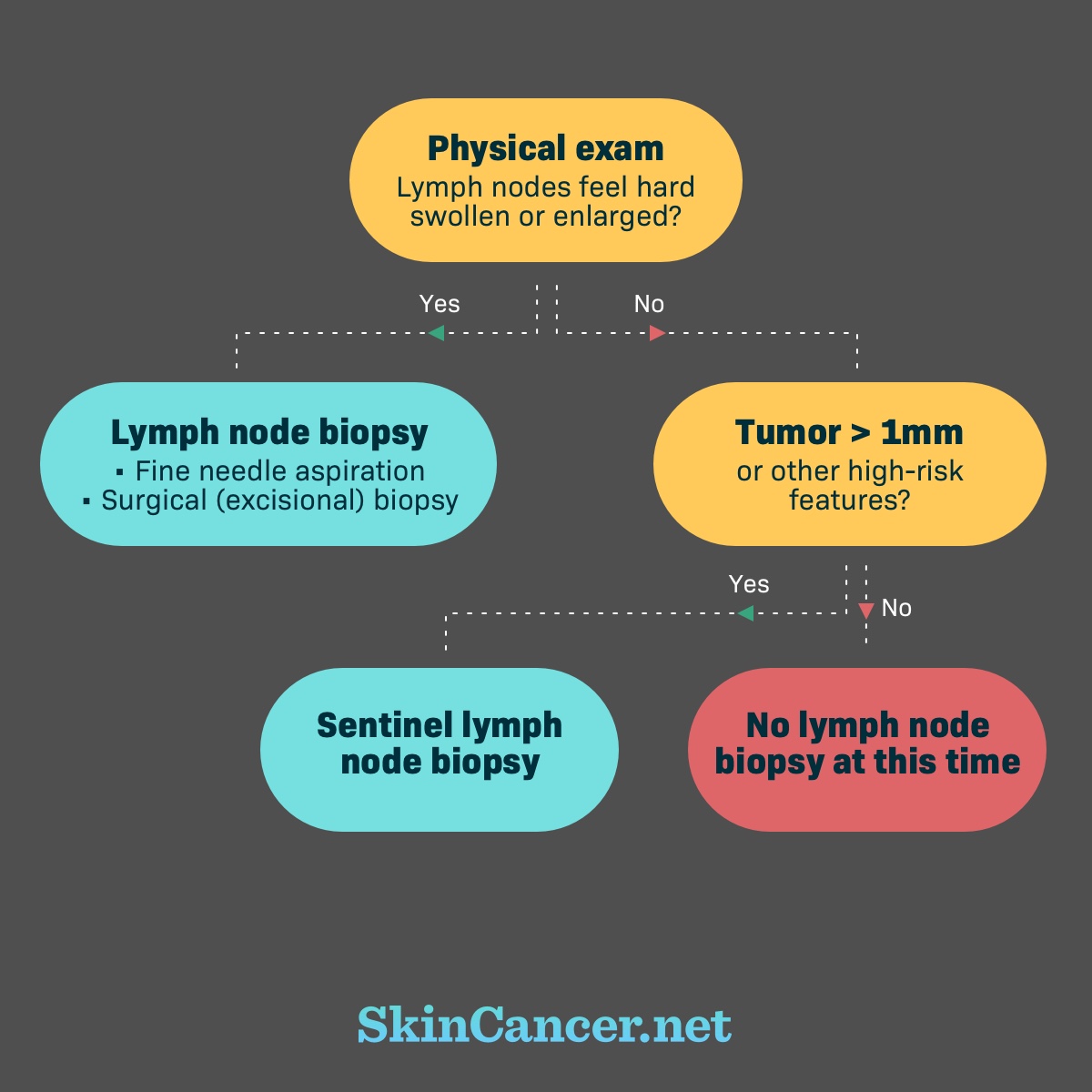 How is a fine needle aspiration biopsy done?

Fine needle aspiration is accurate for finding melanoma. One estimate is that this procedure correctly identifies 92% to 96% of lymph nodes with melanoma.7 It also correctly rules out melanoma in about 99% of cases.7

How is a surgical (excisional) lymph node biopsy done?

Surgical lymph node biopsy is performed in a hospital or outpatient surgical center.8 You may be sedated and given a local anesthetic (numbing medicine). General anesthesia might also be used, which means you will be unconscious for the procedure. Your surgeon will make a small cut and remove the swollen lymph node or nodes. Your surgeon will close the incision with stitches. It will leave a scar. You will probably be able to go home the same day. The lymph node goes to the lab to be studied.

How is sentinel lymph node mapping and biopsy done?

“Mapping” is done to determine how lymph travels around the tumor. The purpose is to identify the lymph node closest to the skin tumor, called the sentinel node. A radioactive dye is injected in the skin near the original tumor.4 A special camera is used to see where the dye travels. The place where the dye collects is the sentinel lymph node. Next, a blue dye is injected to make the vessels and sentinel lymph nodes stand out during surgery.9 A surgeon removes the sentinel lymph node and studies it under a microscope.4 If there are no cancer cells, then no more surgery is needed. If there are cancer cells, the rest of the lymph nodes in the area are removed. They are studied under a microscope. If cancer is found in the lymph nodes, more tests will be done to see whether it also has spread to distant organs.

How are the results of lymph node biopsy used?

The results of the biopsy are used to stage the cancer. Cancer staging is a way of describing how extensive a cancer is. The stage is determined by tumor size and cancer spread. Knowing the cancer stage helps with treatment planning. It also relates to your prognosis, or chance of survival.

The results might indicate that additional tests are needed. If the cancer is in the lymph nodes, it may also have spread to distant parts of the body. Your doctor may recommend imaging tests to look for cancer in the lungs, liver, brain, or bones.