Nose Bandaging is Not my Speciality

“This is a really bad bandage,” I said to my face in the mirror.

My boyfriend had been making bandages for me out of the Curad non-adherent pads that we got at the Mohs surgery office. He’s good at it because he has done it before. He cut a shape the size of my nose and adhered it with tape. When I tried to cut my own, he laughed and said my nose wasn’t that big.

Left to my own devices

My boyfriend went on vacation with his family, so I was left on my own to try bandaging my nose again. I reached into the bag of “goodies” I'd gotten from my doctor and pulled out a Band-Aid. When I put it on my nose, it hung off from the bottom, looking like a shield from Star Wars. I smushed it around and stuck it onto my nose with tape. I don’t even know why I used that Band-Aid. It's the kind that sticks on REALLY well, so well that it hurts my skin to pull it off. 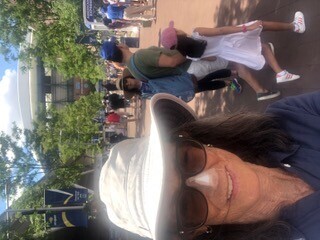 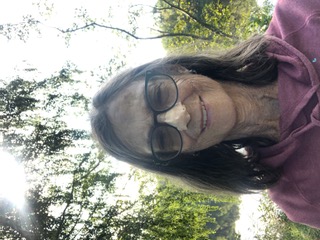 Not my first time at the Mohs rodeo

At a previous visit with the Mohs surgeon, the doctor removed a squamous cell cancer from my nose and put in 12 stitches along the edge of the excision. I was surprised by the number of stitches. During the healing process, and before the stitches were removed, my boyfriend made the bandages for me. This time I had a surprise and unplanned procedure called dermabrasion on the scar.

My latest visit was to remove a squamous cell cancer from the top of my head. When it was over, I asked what the surgeon thought of the scar on my nose. It didn’t bother me too much, but you could see that it was red. She said she would do a dermabrasion on it and schedule me for a laser treatment follow-up at a different office. She numbed up my skin and went at it. I asked what it was, and she said it was sort of like sandpapering it.

Not a welcome surprise

In hindsight, I think they shouldn’t have sprung the idea of dermabrasion on me in the moment. I'd rather not have found out about this surprise procedure while lying on my back, catching my breath after Mohs surgery on my head.

What is dermabrasion anyway?

The American Society for Dermatologic Surgery explains: “Dermabrasion is a procedure that uses a wire brush or a diamond wheel with rough edges to remove and level the upper layer of skin. The treated area heals, allowing new skin to grow in its place.” According to The Mayo Clinic, “Dermabrasion can decrease the appearance of fine facial lines and improve the look of many skin flaws, including acne scars, scars from surgery, age spots and wrinkles.”

I wish I'd known

The reason I needed dermabrasion happened to be from a scar from surgery. “Skin treated with dermabrasion will be sensitive and blotchy for several weeks,” the Mayo Clinic continues. “ It might take about three months for your skin tone to return to normal.” Again, it would have been nice to know this.

It could be worse, but it wasn't great

As a friend of mine says when I get upset about something fixable, “Nobody died.” True, nobody died, but this whole dermabrasion thing and the lack of follow-up could have been handled better. I think this office has gotten a little too busy. I know it is because they are top-notch and specialists in high-risk patients like myself.

Focusing on what I can do

Still, instead of handing me a paper on “post-dermabrasion care” that says to cover for about two weeks or until healed, someone could have discussed it with me. I can’t do anything about it now, so I better focus on what I CAN do. And that means putting on a better bandage.

Do you have some best practices for bandaging a nose after skin cancer surgery?

Squamous Cell Carcinoma on the Lip: What It Is and What It Isn't

2 comments
This article represents the opinions, thoughts, and experiences of the author; none of this content has been paid for by any advertiser. The SkinCancer.net team does not recommend or endorse any products or treatments discussed herein. Learn more about how we maintain editorial integrity here.