Charmeon's Story of Loss: In Memory of Reef and Don

Editor’s Note: This guest post was written by Charmeon Carneson about her grandson, Reef, and her husband, Don who both sadly passed away from skin cancer. Reef was diagnosed with squamous cell carcinoma at the age of 6, and Don was diagnosed with melanoma. Charmeon shares their journeys with us. 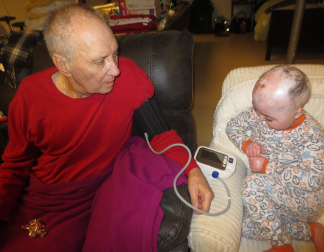 Reef was diagnosed with high risk infant ALL at the age of 5 months at a regular pediatric check-up in South Africa. He started treatment immediately, but did not achieve remission and was the youngest bone marrow transplant (BMT) patient in South Africa at the age of 11 months.

Sadly, he developed chronic severe graft-versus-host-disease (GVHD) of his skin, eyes and gut and there was no further treatment available for this condition in South Africa. At the age of 3 years, we were truly blessed to get treatment for him at Los Angeles Children's Hospital. Reef was unable to speak, walk, crawl or eat and had been tube-fed for 2 years. 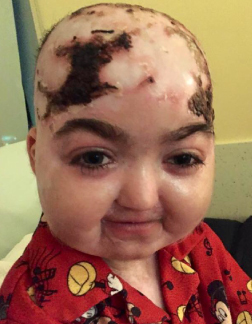 After getting his GVHD under control he developed a secondary, squamous cell carcinoma of his head and face as a result of the very treatment that was supposed to cure his GVHD. Reef had a very strong topical chemo applied to his head which would make him scream morning and night and caused massive scabs all over his head. LA Children's Hospital then referred him to Cincinnati Children's Hospital where they had a treatment plan, and once again, the family was uprooted and moved to Ohio. Reef underwent many biopsies and Mohs surgeries, but sadly the SCC infiltrated his skull and the dura of his brain.

During this time, four years ago my husband Don (whom Reefie called "Doh Doh" and I was "Oh") was diagnosed with melanoma in South Africa. He was given one bag of interferon after which he had a massive heart attack and treatment had to be stopped. He was then referred to another oncologist who sadly just "watched" his symptoms and ordered every test imaginable, but did nothing for a solid year. It was found that he had a pheochromocytoma on his right adrenal gland which was later confirmed in the USA to be melanoma. 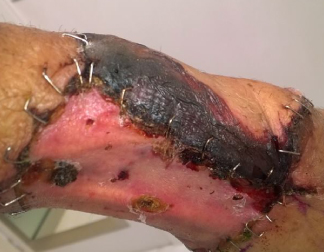 In the interim the lesions on his right forearm were resected, but grew back at an alarming rate after which very extensive surgery was done with flap reconstruction and repositioning of his radial artery. Once again Don was referred to yet another oncologist in South Africa who was a gem, but his hands were tied with the treatment available for melanoma.

Although Don was lucky enough to get onto a trial for Opdivo (which really helped) and then followed onto a trial for a combo of Yervoy and Opdivo, this only lasted for 4 treatments and that was it. Again, I appealed to an oncologist in Cincinnati to help and we found an angel who really went the extra mile to get treatment for Don.

Don and Reef were inseparable during treatment

We moved into the basement of the house my son was renting in Cincinnati and spent every waking moment with Reef who loved his Doh Doh and often accompanied him to his chemo sessions and "assisted the nurse" with Don's infusions. Everyone loved Reef at adult oncology and he was always greeted with hugs and smiles from everyone including patients.

Don's oncologist in Cincinnati decided to change his treatment to a combination of Cisplatin and Taxol which seemed to be keeping this monster at bay, but he then developed a severe allergic reaction to the Cisplatin and was left with only the Taxol. Don eventually became confused, anxious, and sometimes combative and it was discovered after an emergency CT brain scan that he had a large tumor in the right temporal lobe which was surgically removed.

Sadly, the confusion and anxiety remained and he was unable to remain still for long enough to have the radiation planned for him. It was suggested that he be admitted to hospice to get his pain under control, but passed away three days later.

Reef had to undergo massive surgery 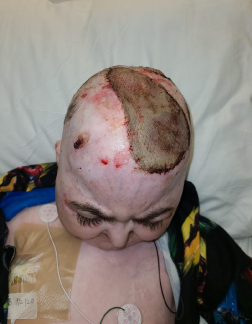 Reef then had to undergo massive surgery to remove a large piece of his skull, and a muscle was taken from his back to cover his brain and grafts from both of his legs to cover the muscle. This was followed by 16 radiation treatments after which the family were told they were no longer allowed to stay in the USA. They then traveled to the UK with a very sick little boy where he was admitted into hospital in Newcastle. It was found that the cancer had infiltrated his lungs and he suffered for days battling to breathe before he was intubated.

Reef and Don were the center of my world

When they were not able to stabilize his SATS, a CT chest scan was done and his parents were advised to switch off the machines. I cannot tell you what this has done to our family. Reef was the center of our world, and Reef and Don the center of mine.

I have found myself beyond angry and inconsolable in my grief. He fought for so long and so hard so WHY? Reef was given the option in the UK hospital when a new experimental drug (only used on adults with SCC before) was offered to him whether he wanted to fight or not. His answer was "I want to fight Daddy, I am not ready to go to Doh Doh and to Jesus." Reef died just 3 months before his 13th birthday. 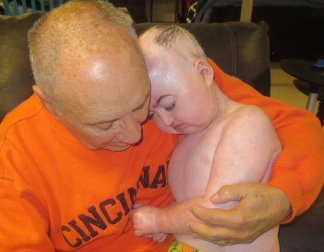 Which Type of Doctor Should Treat My Skin Cancer?

6 comments
This article represents the opinions, thoughts, and experiences of the author; none of this content has been paid for by any advertiser. The SkinCancer.net team does not recommend or endorse any products or treatments discussed herein. Learn more about how we maintain editorial integrity here.