I have many scars. Until my recent diagnosis of melanoma in situ, I looked upon my scars rather fondly. Most remind me of a special time or place during my life.

Looking at the large scar across my knee, I laugh. I tripped over a coat hanger and fell during the last mile of the Army Ten-Miler. With major road rash and wounded pride, I limped my way across the finish line. I still have a visible scar on my finger from when a baby boa bit me. The scar brings me back to my time stationed in Panama and my somewhat fearless days. When I glance at my C-section scar from the birth of my youngest son, I remember how excited I was for him to join the family eighteen years ago.

I also have scars from my chemo port, multiple biopsies, and surgeries which represent my survival of invasive ductal carcinoma (breast cancer) that I was diagnosed with in 2016. I wear tank tops proudly knowing that, thanks to the chemo and those surgeries, I’m still here to face another day.

With all the fondness for my scars, I’m not sure why I was so devastated with my recent scar from a melanoma in situ. I mean, it is just another scar.

During March 2021, I had my six-month full body skin check. I had a dark spot on my cheek but didn’t think too much of it. When the dermatologist came in, the first thing out of his mouth was "we’re going to biopsy that spot." “Another basal cell?” I asked. “No, I don’t think so. It might be something more.” He did the biopsy.

I thought I'd need to go through chemotherapy again

When he called with the results, he said it was a melanoma in situ. I had never heard of it before, so I was envisioning more chemo. I was relieved when he said "it's just on the top layer of the skin." He added, however, that I would have to get it removed during a slow Mohs procedure.

This Mohs surgery was unlike my previous Mohs procedure, which occurred within one day. This time, the dermatologist removed tissue from around the tumor and then they sent the sample to an off-site lab to check for cancerous cells. I went home with this massive bandage on my face. Two days later, when the results came back and the tumor margin was clear, I returned to get the quarter-size hole sutured up. Had the margins not been clear, the surgery would have resumed. The dermatologist warned I would have a scar. She wasn’t kidding.

I cried when I removed the bandage a couple of days later. The incision was close to four inches long and ran from the side of my right eye, down my entire cheek, to near the side of my mouth. In order to cover the hole, they stretched my skin across, leaving a raised flap. I truly looked like Frankenstein and felt disfigured.

Another scar for my collection

For many months, on my multiple Zoom calls, I left the video off. I rarely left the house and was grateful for the COVID mask mandates. Almost a year later, the scar is still very visible and admittedly, it bothers me. However, I’m no longer as distraught as I was. I know in time it will continue to fade and will be just another scar to add to my collection.

How do you cope with visible scars from skin cancer surgeries? Share with us in the comments 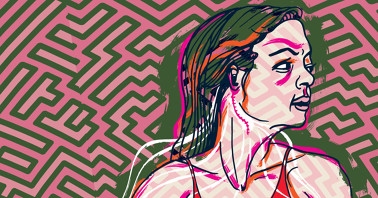 How to Deal with Questions about Your Efudex Treatment

8 comments
This article represents the opinions, thoughts, and experiences of the author; none of this content has been paid for by any advertiser. The SkinCancer.net team does not recommend or endorse any products or treatments discussed herein. Learn more about how we maintain editorial integrity here.