“After today’s treatment, you’re finished.” My oncologist paused, a smile on his face.

For a moment, I thought I misunderstood him. Finished? My treatments are over? Was that what he said?

He reassured me that I had heard him correctly. Then, he added, that I could now ring the bell.

“Sure, your treatment is finished, so you can go out there and ring that bell.”

Can I believe that treatment is over?

I stared at him. Hearing those words...Ring the bell. All of it just seemed surreal. After all this time, it was just hard to believe. 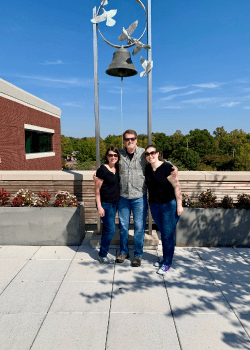 August 30th started out as just another treatment day. Every six weeks, I'd have my blood drawn and lab work processed, followed by a doctor’s consultation and then my treatment: a thirty-minute IV infusion. Sometimes my visits would include a CT scan.

Yet, in the back of my mind, I thought about these last couple of years. Everybody has been impacted by the pandemic—especially cancer patients. In my case, the past twenty-four months were full of both highs and lows. My family and I have had our share of challenges, heartaches…along with some wonderful times.

My treatment regimen started in October 2020. During the summer, a biopsy confirmed that melanoma had spread (metastasized) to another part of my body.

So, that fall, I began a new cancer therapy—called immunotherapy—to halt further spread of the disease. Unlike chemotherapy or radiation, which directly target melanoma tumors, immunotherapy teaches your body to fight back against melanoma by activating your immune system.

Immunotherapy typically ends after two years of treatment. After that initial twenty-four months, it’s up to the doctors to decide on next steps.

My oncologist's surprising answer—that my treatments have now ended—threw my otherwise routine visit into a state of flux, but in a good way.

We talked about my upcoming appointment—scheduled for October—which would include a CT scan. As various emotions bounced around in my head, I could hardly focus. Excited. Shocked. This was good news…no, great news…and so unexpected.

Once my oncologist left the room, I phoned my wife.

When she answered, I said “Guess what?”

I choked up telling her our great news.

The infusion nurse removed the needle, pressed a gauze bandage onto my arm, and then tossed the IV tubes into the trash. With my morning at the cancer center now over, I gathered my things and headed to the checkout desk—my mind racing with emotion.

After checking out, I stood outside in the late August heat. At that exact moment, nothing else mattered. Not the heat, nor the traffic I would face driving home. Nothing.

My cancer journey would soon take a significant turn—a positive turn—which I hoped would continue for many years to come.

Seated in my car, satellite radio played a live version of Free Fallin’ by Tom Petty and the Heartbreakers. The concert crowd sang along with the song’s familiar chorus…Now I’m free…Free fallin’…Yeah, I’m free…Free fallin.’  Those words captured the excitement I felt while driving home that morning, surrounded by other drivers going about their lives. Just another day had become very special for me.

Soon, I would ring the bell.

To mark the end of cancer treatment, ringing a bell has become a symbolic practice. A celebration that provides closure—much like a school graduation—and gives the patient a feeling of control after enduring an often overwhelming treatment journey.

Ringing the bell has been on my mind for well-over two years. During infusions, I’d look out the window and see the bell hanging at one end of my cancer center’s outdoor patio. That bell symbolized a goal I wasn’t sure I’d ever achieve—no more treatments. Perhaps even cancer free! Ideas that seemed so out-of-reach a few years ago. See, my treatment journey started long before October of 2020.

I was originally diagnosed with stage IV metastatic melanoma back in late July 2013—more than nine years ago. Like many melanoma patients, my journey has had its share of ups and downs, along with twists and turns.

Ringing the bell. I couldn’t wait.

Six weeks later, I’m back at the cancer center. Blood work and a CT scan now completed; I made my way to the outdoor patio on the third floor. Vicki and our daughter, Emily, joined me, along with a few nurses and one of the center’s social workers. Music, noise clackers, and my own personal bell provided the soundtrack for an emotional morning. 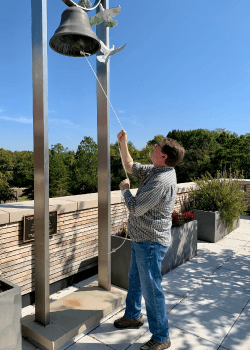 I’ve already received my Treatment Completed certificate, signed by the infusion nurses, and, earlier that morning, a “congratulations” from some of the radiology staff.

I stepped up to the bell and pulled. At first, all I heard was a small clink.
Then I yanked the chord as hard as I could. The bell clanged and banged loudly…above the cheers and the congratulations from those around me.

I finally rang that bell.

The Last Chapter in Topical Medications Story: The Follow-up Visit

The Moment I Heard the Words ‘You Have Stage IV Cancer’