Your immune system is your body’s defense against abnormal or unhealthy cells. These may be cells infected with a virus. They may be infectious bacterial cells. They could be abnormal cells that are dividing in a rapid and uncontrolled way – and developing into cancer.

It may be possible to treat skin cancer by turning your immune system against the cancer. Several medications are available that:

How does the immune system work?

You have two kinds of immune defense: innate immunity and adaptive immunity.1

Innate immune cells are generalists. They recognize patterns that indicate a dangerous (pathogenic) cell. They respond quickly, usually by creating an inflammatory response.1

T-cells are important targets for medications called immune checkpoint inhibitors. These medications are described in detail below.

How do immune cells communicate?

Immune cells communicate through receptors and ligands.1 You can imagine this like a lock and key. Receptors (the lock) are proteins on the cell surface. They receive chemical signals from outside the cell. These chemical signals (the key) are called “ligands.” When the ligand fits into (binds with) the receptor, it activates the receptor. Activation causes changes within the cell.

Cytokines, which are proteins that act like signaling molecules, are important for immune cell communication. They are ligands for cell surface receptors. Cytokines have a role in cell growth and immune cell activation.

Cytokines can be made in a lab and given in high doses to treat skin cancer. These medications are described in more detail below.

What are immune checkpoint inhibitors?

Immune checkpoint inhibitors are medications that block specific proteins on T-cells or on cancer cells (Figure 1).

The surface of T-cells has receptors that act like brakes. Two important brakes are called PD-1 (“programmed death receptor-1”) and CTLA-4 (“cytotoxic T-lymphocyte-associated protein 4”). These brakes exist to keep the immune response in check. Some cancer cells evolve to engage these brakes. By engaging the brakes on T-cells, cancer cells escape your immune defenses. For example, some cancer cells have a protein called PD-L1 (“programmed death ligand-1”). When PD-L1 binds to PD-1, it acts like an “off switch” for the T-cell. This makes the T-cell ignore the cancer cell. 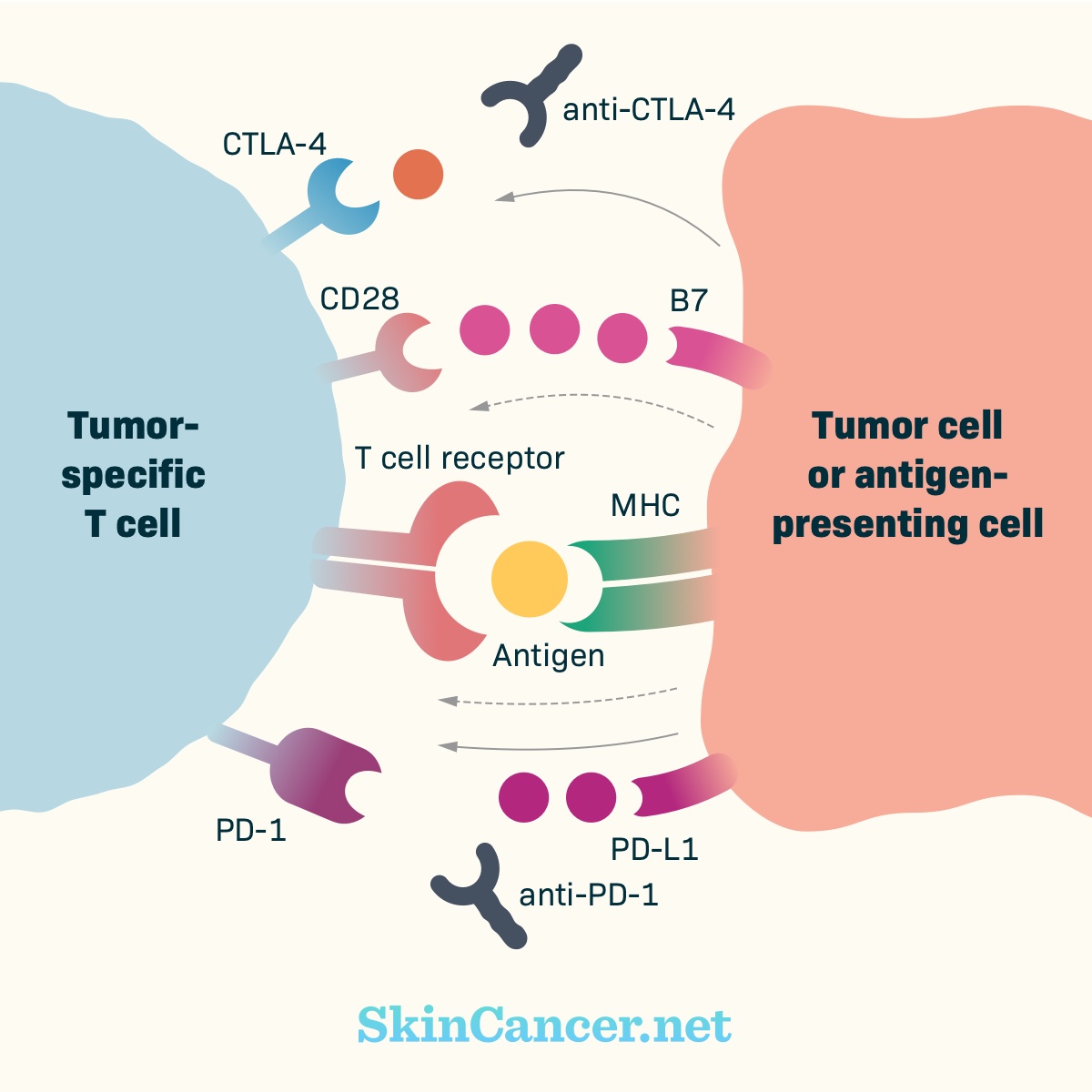 T-cells recognize antigens on tumor cells. However, a second signal is needed in order to recruit other immune cells and kill the cancerous cell. The second signal comes from a “checkpoint” receptor, such as PD-1 or CTLA-4. These receptors are brakes that exist to keep the immune response in check. Some cancer cells evolve ways to engage these brakes and escape your immune defenses. Immune checkpoint inhibitors block this interaction. They enable T-cells to recognize and destroy cancer cells.

What do immune checkpoint inhibitors treat?

Keytruda, Opdivo, and Yervoy treat certain forms of advanced melanoma. They may also be used for additional treatment of certain forms of melanoma after surgery. Bavencio and Keytruda (pembrolizumab) are approved to treat certain forms of Merkel cell carcinoma. Libtayo (cemiplimab-rwlc) is approved for metastatic cutaneous squamous cell carcinoma (CSCC) or locally advanced CSCC in patients who are not eligible for surgery or radiation to cure their CSCC. Libtayo® (cemiplimab-rwlc) immunotherapy may also be used to treat people with certain forms of advanced basal cell carcinoma. Keytruda (pembrolizumab) is also approved to treat metastatic, locally advanced or recurrent cutaneous squamous cell carcinoma that cannot be cured by treatment with radiation or surgery. Tecentriq® (atezolizumab) may be used in combination with Cotellic® (cobimetinib) and Zelboraf® (vemurafenib) targeted therapies for metastatic or unresectable (unable to be surgically removed) melanoma that has the BRAF V600 mutation.

How are targeted immunotherapies given?

All currently available targeted immunotherapies are taken intravenously (in the vein). Your doctor will typically give you the medication every 2 to 6 weeks, depending on the medication and dose. One exception is adjuvant Yervoy, which may eventually be given every 12 weeks. Adjuvant therapy is an additional cancer treatment that is given after the primary (main) treatment. Adjuvant therapy can help lower the risk that the cancer comes back.

What are side effects of targeted immunotherapies?

Common side effects of some of these therapies include:

There are additional side effects for each medication. Read the Medication Guide that comes in the package before starting immunotherapy.

What do cytokines treat?

Depending on the specific form of skin cancer, cytokines may be a potential treatment option.6 Cytokines may be used alone or in combination with other medications.

What is an oncolytic virus and how does it work?

Talimogene laherparepvec is a type of medication called an “oncolytic virus.” It shrinks melanoma tumors in the skin and lymph nodes.

The exact way that talimogene laherparepvec works is unknown.7 It is thought to work by:

What other intralesional therapies are used to treat melanoma?

The Bacillus Calmette-Guerin (BCG) vaccine has been used to treat stage III or recurrent melanoma for many years.8 Its use has become less common now that new immunotherapies are available.

This vaccine is made from a strain of bacteria called Mycobacterium bovis. The bacteria are introduced to the body and immune cells travel to the site to fight them.9,10 In the process of destroying the bacteria, the immune cells also destroy nearby abnormal cancer cells.9

Can immunotherapies be used together?

It may be possible to combine immunotherapies and target the cancer in two different ways at the same time. For example, Opdivo and Yervoy work on different receptors and may potentially be used together to treat certain forms of melanoma. Researchers continue to study if additional combinations of immunotherapy might help improve treatment.

Ask the Advocates: What Are Your Favorite Winter Skincare Tips?

Skin Cancer and My Mortality