In Sickness, In Health

This April, my husband and I will celebrate eight years of marriage and thirteen years as a couple.  Reflecting on our time together, I’m flooded with fun memories of us hiking and biking through the mountains of Colorado, deep-sea fishing off the Florida Keys, standing atop the Empire State Building in New York City, and other exciting adventures. Like many couples, we’ve also had curve balls thrown at us along the way and have always managed to dodge them as a team. By far though, the toughest obstacle we’ve overcome was my cancer diagnosis two years ago. I realized then just how lucky I am to have found a person in this world who will unselfishly support and care for me -- even during the worst moments of my life.

After being diagnosed with Stage 2 melanoma on my scalp, I underwent extensive surgeries, physical therapy, and immunotherapy. At the time, my husband was working nights building highways for a major construction company. During the day, he would care for our three year-old daughter while I was at the hospital for various appointments. Working all night and then caring for our daughter during the day, my husband rarely slept. I don’t know how he managed it!

In addition to all of that, he also became my nurse and source of entertainment. For example, when I received the PICC line in my right arm to receive infusions of Interferon, my husband assumed the role of flushing out my lines twice per day using saline-filled syringes. When I developed large blood clots in my arm from an infected IV, my husband gave me shots of blood thinner three times per day because I couldn’t stomach giving them to myself. When the skin graft on my scalp began to rot, my husband provided the intense wound care my doctors prescribed. 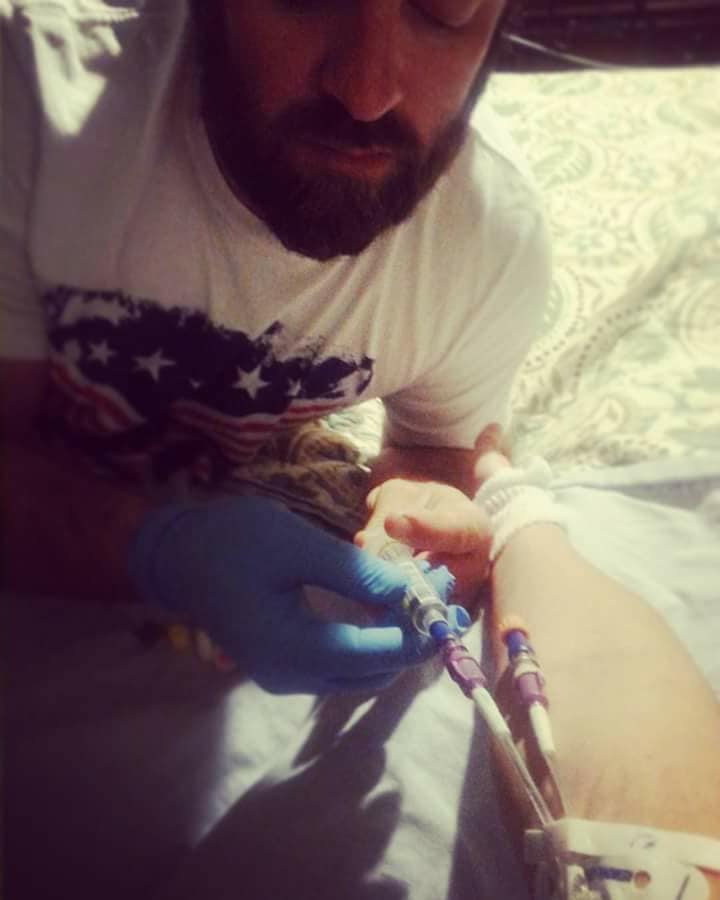 After I completed my first three months of immunotherapy, my husband surprised me with tickets to see my favorite act, the Dave Matthews Band. And when I was hospitalized and had to miss our daughter’s fourth birthday, he brought her to the hospital to celebrate and pushed me outside in a wheelchair so I could watch her blow out her candles.

Donating his hair in my honor

Perhaps the most visible way my husband showed support was when he learned my surgeries would leave me with a very large scar and bald spot on top of my head. Upon hearing the news, he began growing his hair so I could have a hairpiece made to conceal my scar. Fortunately, I discovered creative ways to cover my scar without needing a hairpiece, but that didn’t stop my husband from growing his hair even longer. As a matter of fact, he continued growing it because, as he said, “My wife may not need it, but someone else will.” After eighteen months, he surprised me on a happy summer day by donating his hair in my honor to the non-profit charity, Children With Hair Loss. I could not have been more proud of him!

Grateful for the support

During my cancer battle, my husband laughed and cried with me, and he did everything in his power to make sure our daughter and I were comfortable. In May 2016, I made a post on Facebook summarizing my gratitude. I wrote, “I’m thankful to have a husband who’s capable of handling the hard parts of marriage – like cancer and all that comes with it. We may have written our own wedding vows and not included the whole ‘sickness and health’ parts, but it appears those parts of the vows weren't needed because he loves me sick or in health anyway. I love you, Brett Tapley. Thank you for everything you do.”

For anyone out there fighting cancer or any other chronic illness, my hope is that you have a significant other, family member or friend who can give you the type of support you deserve. Just having one person in your corner fighting the fight with you can make all the difference in the world.

Why Is Self-Care Important and How Can We Practice It?

3 comments
This article represents the opinions, thoughts, and experiences of the author; none of this content has been paid for by any advertiser. The SkinCancer.net team does not recommend or endorse any products or treatments discussed herein. Learn more about how we maintain editorial integrity here.