I just broke my winning streak. It was nice while it lasted, but my visit to the dermatologist this week brought an abrupt end to all that bliss. I can’t remember the last six-month check I have had when my doctor said, “Hmmm.” If you are a skin cancer patient, you know that tone well – and you dread it. Throw in a, “Well…, “ and you know you are about to meet up again with your old friend The Biopsy. After a brief handshake with my welcome pal, Lidocaine, I was well on my way to our little reunion, and I was left wondering: could it be skin cancer again? 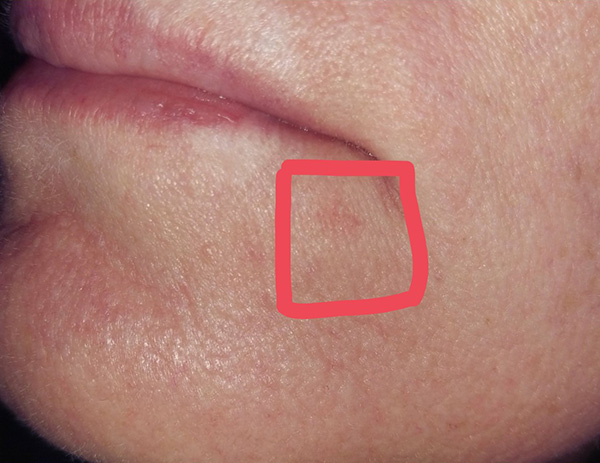 About a month ago, I began watching a spot below the left corner of my bottom lip. I spot treated my lips with Efudex seven months ago, and this little guy was not in the same area I treated–he was new. I made note and took a few pictures to document any changes. As someone with sensitive skin and more than my share of sun damage, I have grown accustomed to noticing every little odd spot and anomaly.

Been there, done that 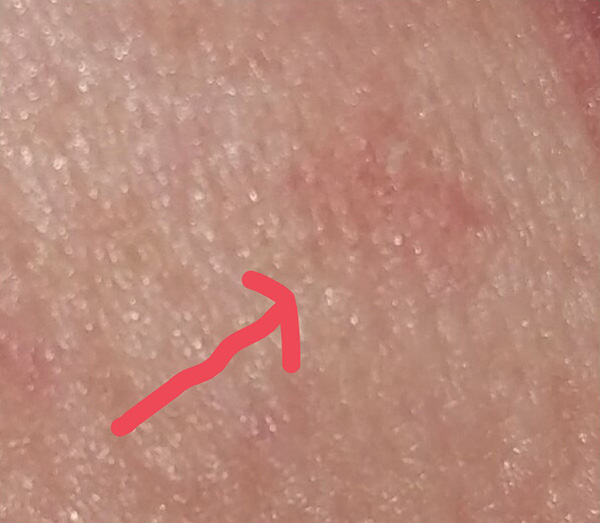 Itches a little and a dry, flaky spot continually shows up.

Somewhere in the back of my mind, this little fella hit a nerve. Firstly, it was not going away. Ding! Ding! Ding! That’s never a good sign. No matter how much moisturizing I did, the spot remained. It was just a few shades darker than my skin tone and leaned toward the dry side. Regularly, it would become dry enough to produce a noticeable flake, but that flake returned time and time again after I gently scraped it off. Strike two! It looked like a smaller version of the two spots I treated on my cheeks in the summer of 2017. Both of those spots reacted strongly to Efudex and are no longer an issue. Annnnnnd…whoomp, there it is!

Prior to my visit, I told a couple friends that I felt my dermatologist would either have me treat with a few weeks of Efudex or he would want to biopsy the spot. Strangely enough, I couldn’t decide which I dreaded hearing more. Efudex, though effective for me each time I have used it, does a real number on me. The side effects, even when treating a small spot are sometimes ruthless. Biopsies usually leave a small scar, and being close to my lip, I knew I had a fair shot of some puckering occurring in the thin skin near my lip as it healed. It was a real toss-up, but I was leaning toward believing I would hear, “Let’s treat it and go from there.” Nope. Not this time.

Could it be skin cancer again?

My introduction into the world as a skin cancer patient was eleven years ago with a melanoma diagnosis. Since then, I have had numerous biopsies and countless cryosurgeries. During all those years, I can only remember my face being cut once; a small spot under my left eye was biopsied in 2010. It was a precancer, no other treatment was needed, and the biopsy site healed nicely. That spot, however, didn’t look like this patch. I would be lying to you now if I said I am not nervous to hear the results.

What this new spot under my lip did look like–I cringe as I type it–is the spot of dry skin I had on my neck several years ago that turned out to be basal cell carcinoma and required Mohs. During that Mohs procedure, I was opened and sutured twice that visit before the doctor found clear margins. Mohs is a godsend, but can be a stressful ordeal.

In about a week, I will either get a call or a letter. My dermatologist’s office is prompt, thank goodness, and sends a letter if results are benign and require no further surgery. I don’t want to get a call. I really don’t. I know I will be well taken care of if this little spot contained basal cell carcinoma and requires Mohs. That should make me feel better, but, you know, skin cancer just stinks. For now, though, I am going to try channeling my doctor’s upbeat vibes. As we parted ways, he said, “We are going to be positive and say it’s likely a precancer–not basal–precancer.” I’ll cling to that for now, but I can’t unhear his initial, “Hmmmm.” Ya know?