As we wrapped up the first of what would become several interview sessions, I asked Trena Brown to reflect on her melanoma journey. Trena will be the first to tell you that she’s rarely at a loss for words. She took a moment to collect her thoughts and then told me, “your second life begins when you realize you only have one life to live.”

Trena’s words powerfully resonate with those melanoma patients or survivors who have beaten the statistical odds of a late-stage cancer diagnosis. Just a few years ago, those same odds were stacked against us (see Captaining an Emotional Ship). New treatment options and cutting-edge research have given melanoma patients, like Trena, a chance for a second life, much like the second act of an all-too-real dramatic play.

All melanoma journeys are unique, and Trena’s journey was no exception. A former corporate executive, she was enjoying retirement and planning her travel adventures when Trena’s world was shaken in March 2013. An odd-looking spot on her right big toe, excised, but benign in 2011, had turned into an ugly blister by 2013. According to Trena, the blister appeared as a gross-looking bubble near her toenail. 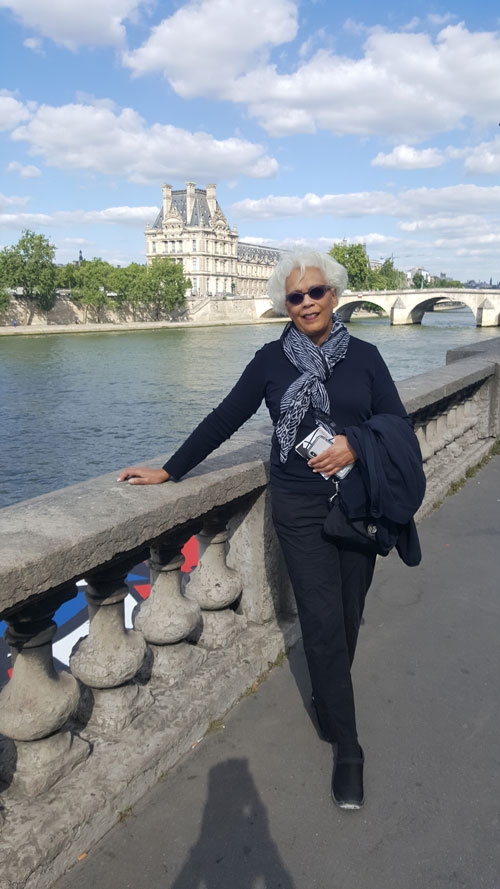 A biopsy was conducted

A biopsy revealed that the blister was acral lentiginous melanoma, a rare melanoma subtype that primarily affects people of color. Acral melanoma can form on palms, the soles of feet, or under finger nails or toe nails. Many people of color are unaware of their risk for this rare subtype, and, unfortunately, acral melanoma may be misdiagnosed or found too late. Tragically, a late diagnosis may mean a lower chance for overall survival.

“Melanoma? That is crazy!”

Trena’s doctor was upfront with her about the diagnosis, telling Trena that she had melanoma, and that she would lose her right big toe. Trena’s response was understandable: "What? I’m a Black woman in her sixties. Melanoma? That is crazy!" Two weeks after her diagnosis, Trena was in a cast up to her knee, her big toe already amputated. With clear surgical margins and following six months of observation, Trena said her world was “back to normal.” She would resume traveling and, eventually, feel good enough to take Zumba classes and to dance at parties. 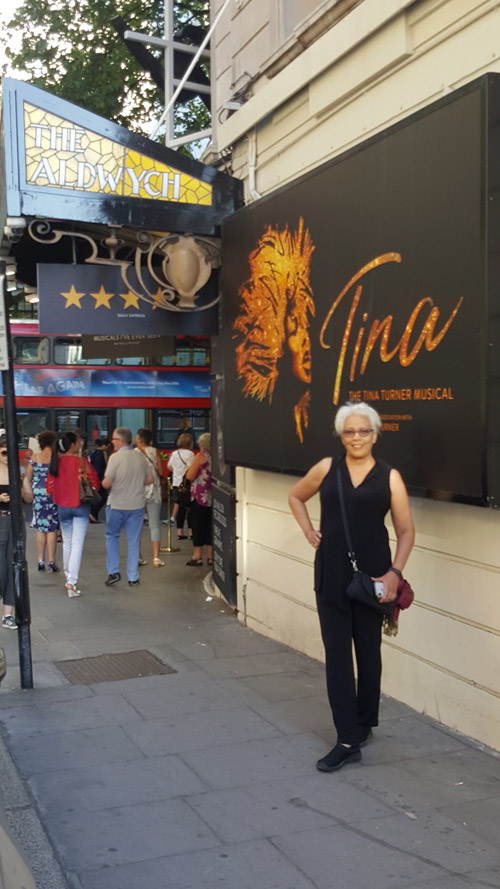 “More out of breath than usual”

For the next two years, Trena enjoyed her retirement, continuing aerobics classes and working out with a personal trainer. Her trainer noticed Trena’s labored breathing and said “you’re more out of breath than usual.” She suggested Trena go see her primary care physician (PCP). When Trena met with her PCP in December 2015 and mentioned being out-of-breath, he suggested a chest x-ray. Those x-ray results led to a CT scan and a subsequent lung biopsy.

Her melanoma had metastasized

Two days after the biopsy Trena received devastating news. Melanoma had spread, or metastasized, to her lungs. Metastatic melanoma (stage IV) can be an all too familiar a diagnosis for patients with prior mid-stage melanomas (stages II and III). Several years ago, Trena recalled that dreadful moment in an online article for the Melanoma Research Alliance (MRA). Her brother, who was on the phone with her when she learned the results, tried to comfort her, but all Trena could hear were her own wild sobs and screaming. Trena thought to herself, "How can this be?"

Trena did what any experienced business executive would do when faced with a crisis: she sought out advice and input from those in the melanoma community, learned all she could about her diagnosis, and listened to her doctors, who told her about recent developments in metastatic melanoma treatment. One of those developments involved teaching the body how to fight back against melanoma, known as immunotherapy. After four months of a combo-immunotherapy regimen, CT scans in May 2016 showed that the tumors in her lungs had reduced to a minuscule size and her lymph nodes had returned to normal. Her doctor characterized the results as “outstanding.” From that point forward, Trena continued treatment for her remaining tumors, called maintenance, which went on for almost two years until those tiny lung tumors disappeared. 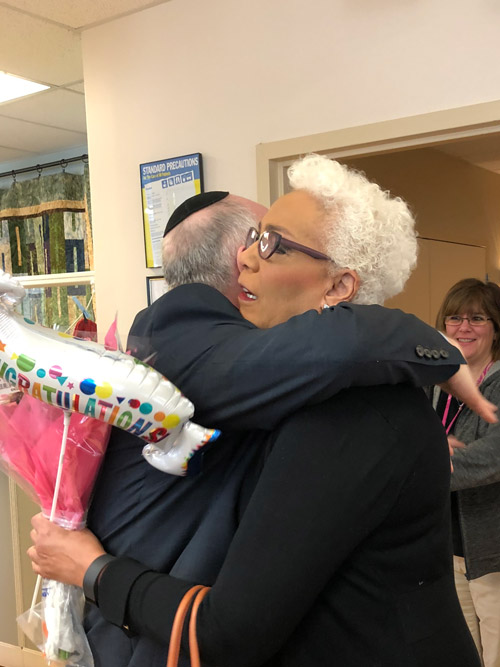 During her subsequent treatment regimen, Trena recalled hearing her cancer center’s bell ring on several occasions. “I had always thought about how it would feel to be able to ring that bell; a symbolic end to a journey that I had never imagined myself to be on.” Scheduled to ring the bell on February 28, 2018, Trena could hardly sleep the night before. Surrounded by her treatment team and her family, Trena remained nervous and timidly struck the bell. Her oncologist told her to “hit it like you mean it.” She struck the bell “at least five times.” Trena’s eyes filled with happy tears as she called them. Trena was understandably emotional that day, thinking about her treatment journey and all the people who had been supportive of her. 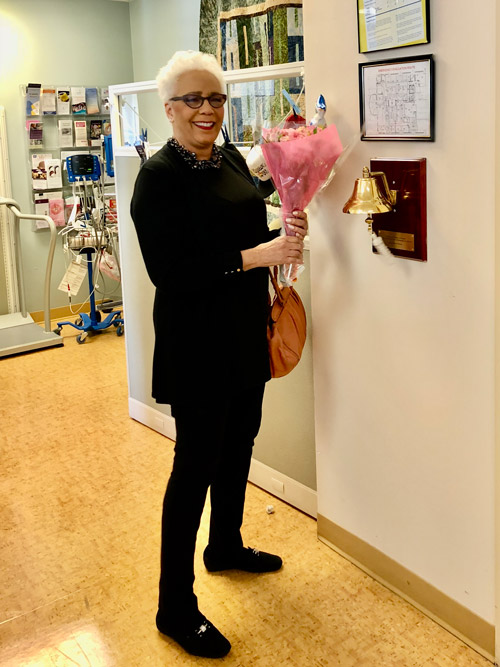 Trena’s second act started right after she rang that bell in 2018. She had some catching-up to do, like resuming her travel bucket list. She went to Europe the summer after her treatment ended. Trena felt both mentally and emotionally strong as she jaunted across several countries during her trip. “I was comfortable with myself and not thinking about anything but having a good time.” Trena also had a new mind set regarding the second act of her journey. She is thankful and “looks at life through a different lens.” Surviving cancer has grounded her and she is grateful for every day.

She also gives back to those causes and institutions that are important to her. Obviously, melanoma awareness is high on her list of causes. Cody Barnett, the MRA’s Director of Communications and Patient Engagement, said that “Trena is an inspiring advocate who is always willing to lend her time, significant expertise, and her powerful story to raise awareness of melanoma and to advance melanoma research and prevention efforts.” “Throughout Trena’s journey with melanoma,” Barnett added, “she has shown time and time again the importance and power of sharing her story in order to put a face and name to melanoma” survivorship and “in service to others” with this terrible disease.

As Trena reflected on her journey and on her second act, or that second life as she called it, she returned to the idea of being grateful for where she is now and where she’s been. Trena says it’s what “cancer did for me, not to me."

Your second life begins when you realize you only have one life to live.Portions of Trena’s treatment experience were quoted from the Melanoma Research Alliance’s Patient survivor stories: "Trena Brown, An African-American Retiree’s Journey."What does your second act look like? Share with us in the comments

Can't Believe This Happened to Me

7 comments
This article represents the opinions, thoughts, and experiences of the author; none of this content has been paid for by any advertiser. The SkinCancer.net team does not recommend or endorse any products or treatments discussed herein. Learn more about how we maintain editorial integrity here.

How well was your skin cancer diagnosis explained to you?