Playing Tennis in the Sun

Play in the sun on better courts, or play in the shade on less desirable ones?

A difference of opinion

One wants to play in the shade. "I have had two squamous cell cancers and can't play in the sun anymore," she says. She has a point, but the options are limited. The one court in the shade is by some accounts in so-so condition. Two want to play on better courts in the sun. One of them says she can't even find that shady court. The other draws a map with an arrow pointing towards Court Number 6 in the shade. Did I mention that we are Grownup People?

Outdoor tennis season brings many joys but there is that little problem of the sun and the wind.

It's what I love

If you complained about the weather, my father always said, “It’s an outside game.” I for one love a good outdoor game especially at a special place called the Holyoke Canoe Club, with clay courts alongside the Connecticut River in Holyoke, Massachusetts. The leaves on the trees dance in the breeze, the sun glistens on the water, and your cares can drift away along with the puffy white clouds. A group lesson – a clinic – on Wednesdays, is like summer camp for grownups. We do drills broken up by sitting under an umbrella, eating watermelon, and telling stories. By then the sun is high in the sky.

In the past, I wasn’t careful, but these days after skin cancer I come prepared. I wear sun protection gloves and a long-sleeved shirt with SPF in it as well as leggings and of course a hat. I slather on sunscreen. My doctors would rather I not play outside, but that’s where the tennis is, so what am I going to do? Tennis is important for my mental health, so I’m not going to give it up.

Picking between the shady and sunny court

The shady court is in a park – Forest Park – but there is traffic all around it. The surface isn’t that great. Some players don’t like the pollen created by the trees. Also, they don’t like the city “ambiance.” I don’t mind because growing up in New York City, I sometimes played on city courts under an overpass from which someone would occasionally toss a bottle.

The Monday players don’t belong to the Canoe Club, so we have mostly been playing on clay courts in a town about 20 minutes away. They are in the sun. They were the site of a controversy last year centering on whether to play in the shade or the sun. The courts were not in good shape this year, so we switched to high school courts nearby.

This sets the scene for the controversy. Let’s call the players Meg, Jo, Amy and Beth. Meg says she has had two squamous cell cancers and will not play in the sun. Jo (OK, that’s me) has had more skin cancers than she can count but does the best she can to protect herself to the point of being uncomfortable. She will play in the sun. She knows Meg has a point and suggests honoring Meg’s concern. Amy and Beth say they will give the city court a try. Jo can’t play that day so she gets a sub.

Amy and Beth report back that for the reasons already stated, they won’t play on the city courts again. Amy says we all apply plenty of sunscreen. Meg says she won’t play in the sun and she will see us in the fall. Amy, Beth, and Jo get to work on finding other people to play. Meg can’t let it go.

“Not playing on Mondays anymore. (Sad) Would like to start up again as a sub
in the fall,” she writes.

The next day, at 7 a.m., she texts, “Beth does not like Forest Park; there brand new courts.” Jo had been awoken in the wee hours by her dog and had just dozed off.

She writes back, “Sorry, it is fun playing with you. If we need a sub on a cloudy day or if we go inside on rainy day we’ll call.”

Meg is being smarter, but Amy, Beth and Jo are having more fun. If only for now. 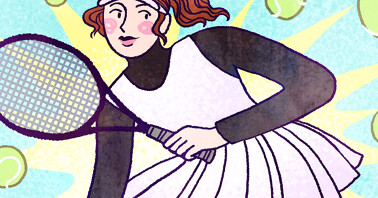 Performing a Public Service While Finding a Sub for Tennis

2 comments
This article represents the opinions, thoughts, and experiences of the author; none of this content has been paid for by any advertiser. The SkinCancer.net team does not recommend or endorse any products or treatments discussed herein. Learn more about how we maintain editorial integrity here.

Have you taken our Beyond the Cancer Diagnosis Survey?