UV light exposure is one of the most important environmental risk factors for most forms of skin cancer. By limiting UV exposure, you can reduce your chance of getting skin cancer.

Why is it important to understand genetic mutations in skin cancer?

There are several targeted therapies approved for skin cancer. In general, these drugs block or interfere with certain areas of cancer cells that cause a cancer cell to grow and divide.

Some of the significant genetic changes in basal cell carcinoma (BCC) affect a cell signaling pathway called Sonic Hedgehog. In particular, some of these genes that may carry mutations include:

One of the most common genetic mutations in squamous cell carcinoma involves the TP53 gene.5

What is the Sonic Hedgehog pathway?

Before you were born, the Sonic Hedgehog pathway had an important role in the development of your organs and making sure the right side of your body matches your left. This pathway is not active in most healthy adult tissue, but skin is an exception.7 In skin, Sonic Hedgehog maintains the supply of stem cells. Stem cells are flexible cells that can develop into many different cell types. The Sonic Hedgehog pathway has a role in the development of your hair follicles and glands and it helps to control skin growth. 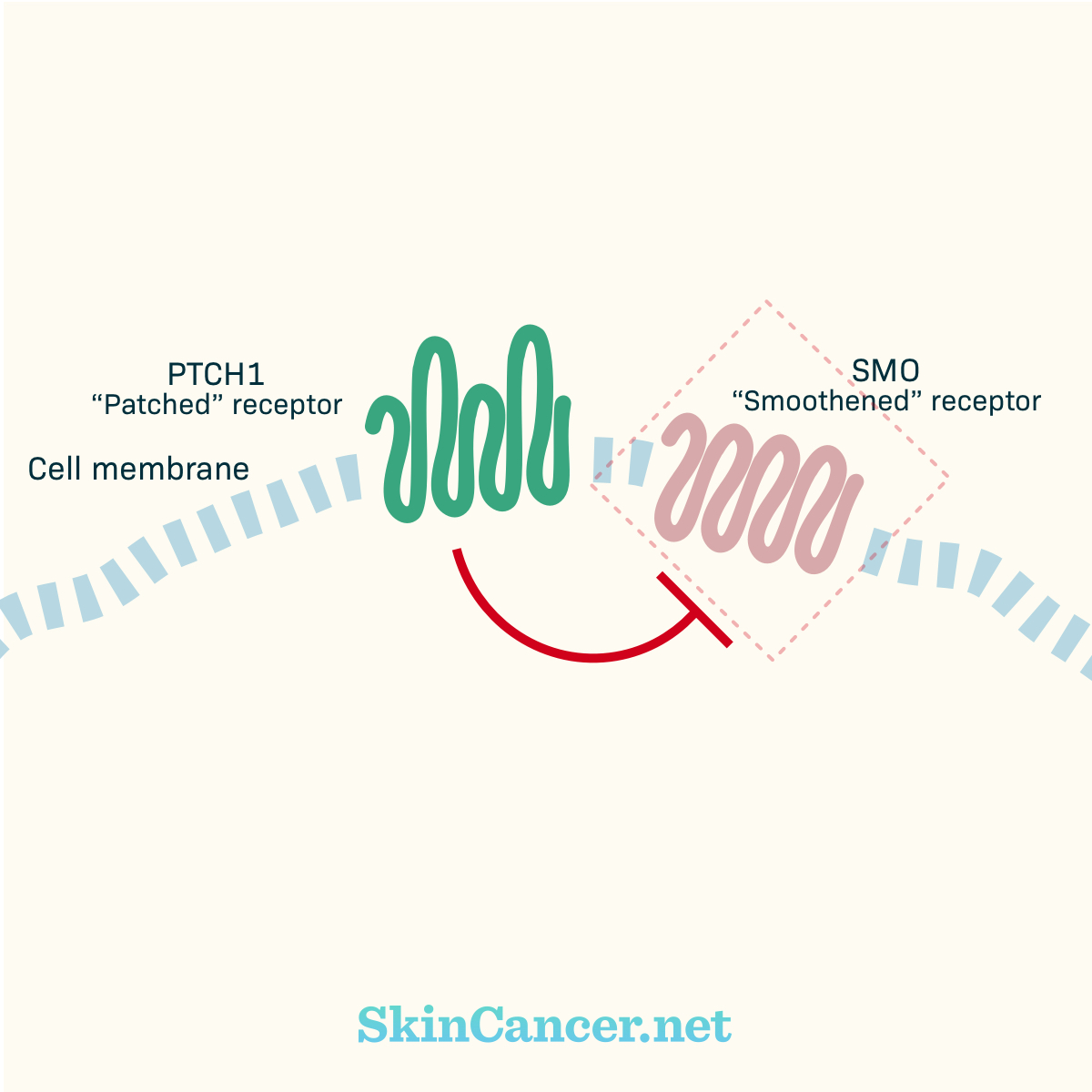 PTCH1 is a receptor in the cell membrane. Without the Sonic Hedgehog protein (SHH), PTCH1 blocks SMO, another receptor, from sending any signals. When the SHH protein binds to PTCH1, the SMO travels to the cell surface. SMO begins sending signals that lead to cell growth and survival. 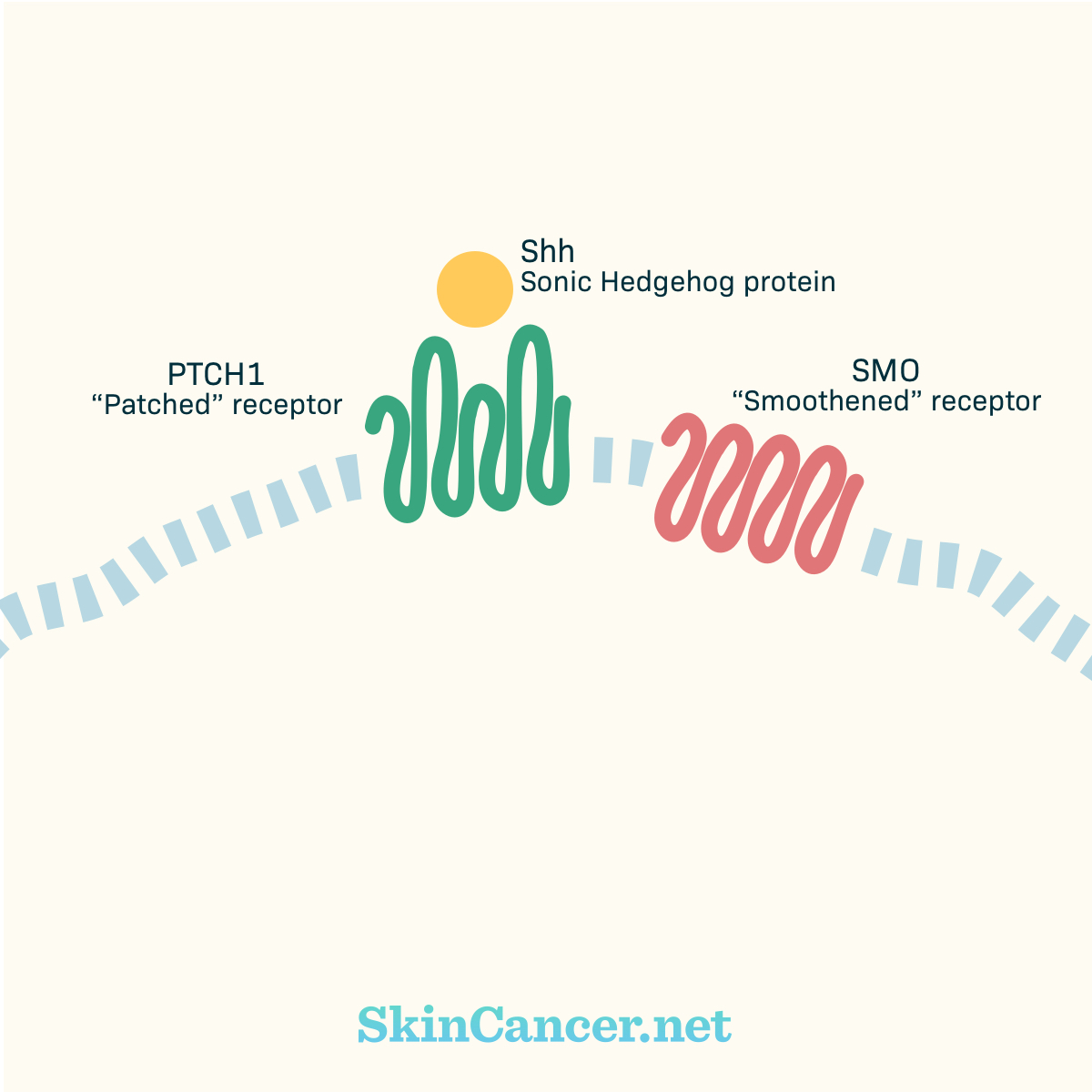 PTCH1 is known as a “tumor suppressor gene.” By keeping SMO inactive, PTCH1 acts as an “off switch” for the process that causes cells to divide and survive.5 But PTCH1 is mutated in about 60% of BCC tumors.8 When PTCH1 becomes mutated, the “off switch” no longer works, and SMO signals freely. The result is uncontrolled cellular growth. Two medications, Erivedge® (vismodegib) and Odomzo® (sonidegib), work by blocking the SMO receptor. 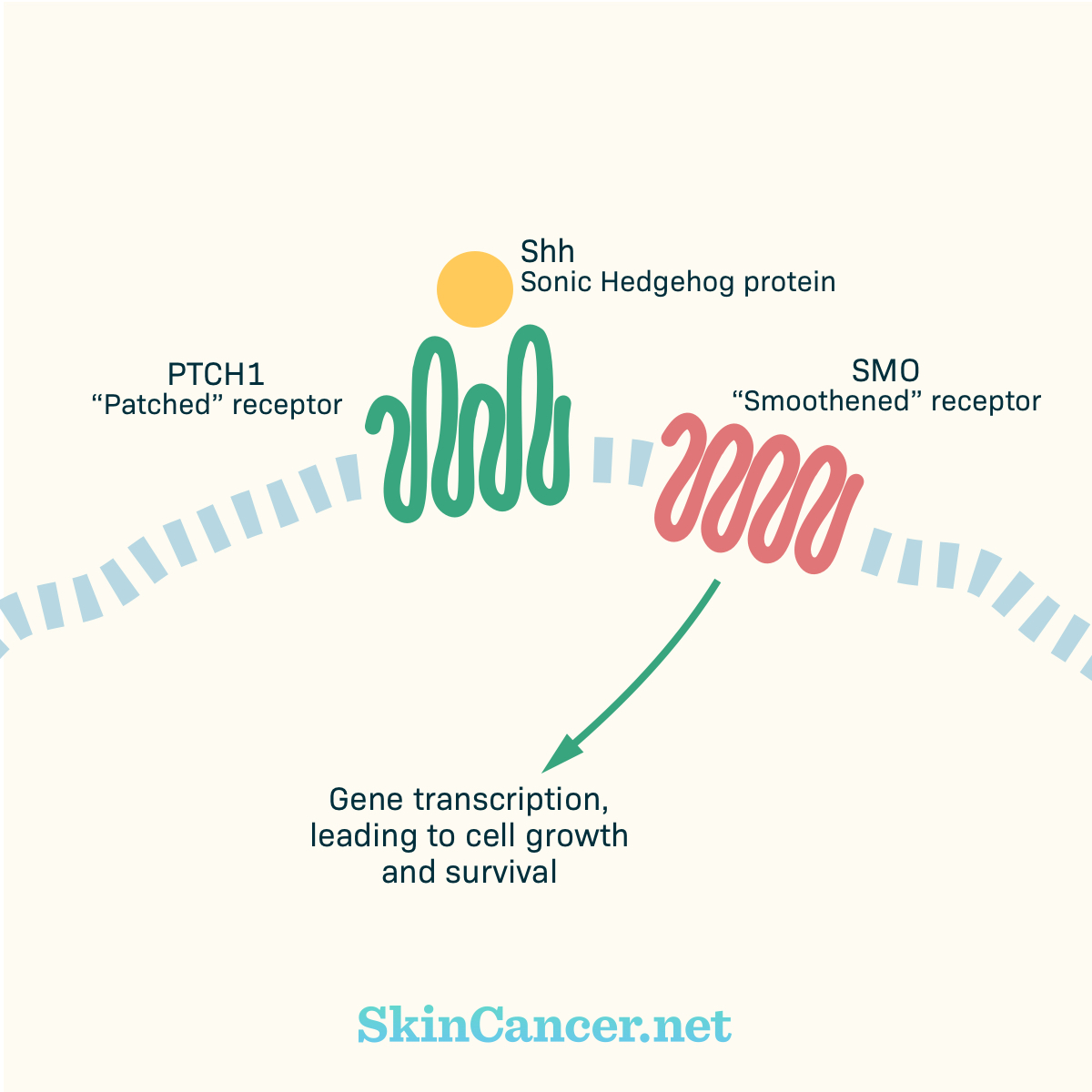 SMO is known as an “proto-oncogene” or a type of gene that causes cells to grow, divide, and stay alive.5,9 Certain mutations to SMO cause it to stay “on” all the time, leading to cancer development. SMO is mutated in 10-20% of BCC.15 When SMO is mutated, the medications that block SMO may not work.10

What genetic changes lead to melanoma?

Some of the most common mutations in melanoma are in genes called BRAF and NRAS.4 BRAF and NRAS proteins have a role in a pathway called MAPK or ERK.11 These proteins are part of a chain of events that allow cells to grow and survive. Normally, there are mechanisms that turn each protein “on” and “off,” keeping the cell processes under control. 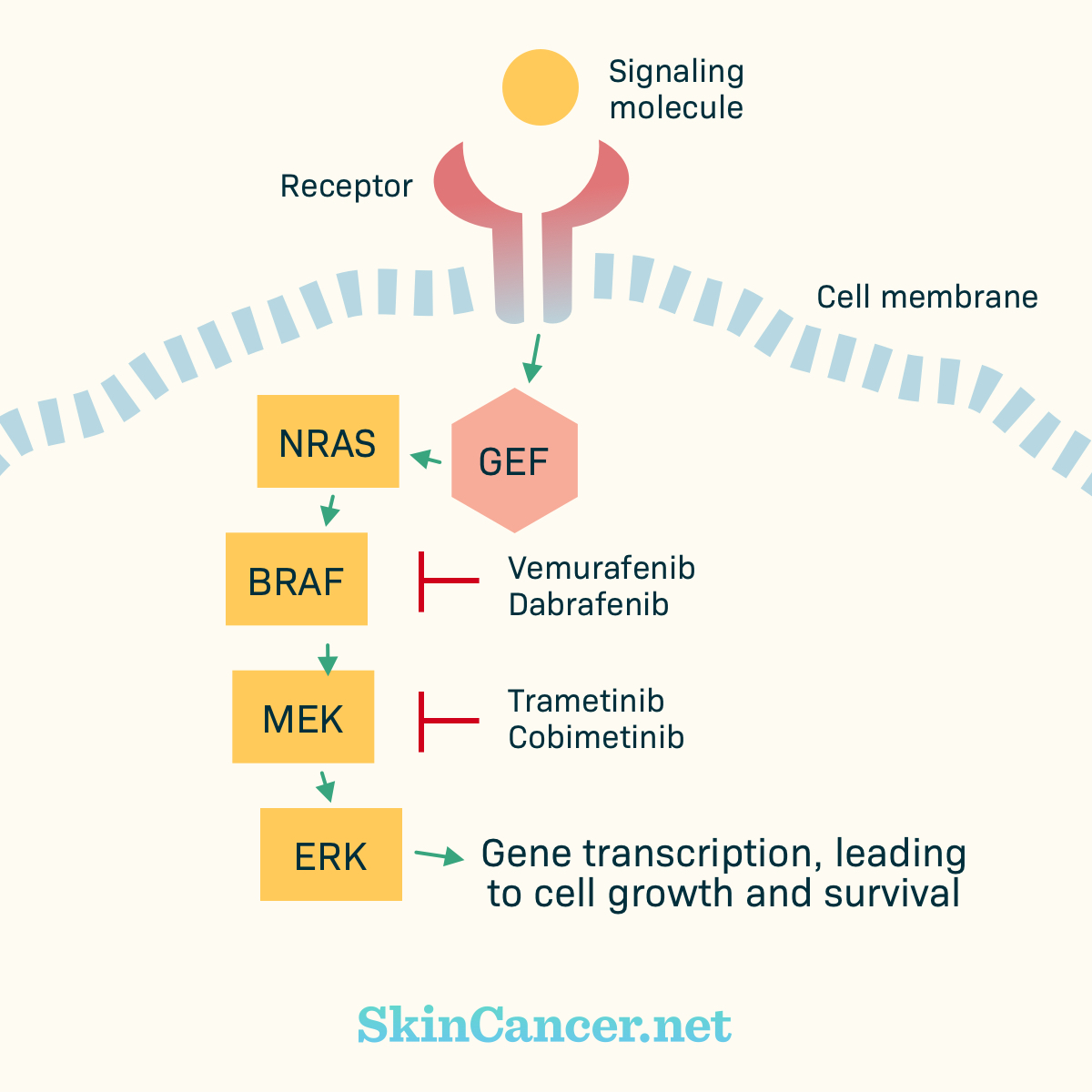 Certain mutations cause BRAF to stay “on,” sending continuous signals for cell growth.12 Two medications used to treat melanoma, Zelboraf® (vemurafenib), Tafinlar® (dabrafenib),and BRAFTOVI® (encorafenib) help to block the BRAF protein. Certain BRAF inhibitors may be used together with specific medications that block MEK, which is another protein in the chain of events. Three MEK inhibitors used for melanoma are Mekinist® (trametinib), Cotellic® (cobimetinib), and Mektovi® (binimetinib).

What other mutations are common

Which Type of Doctor Should Treat My Skin Cancer?