How Does Skin Cancer Develop?

Cancer develops when cell growth becomes uncontrolled. There are different kinds of skin cancer, depending on which type of cell is growing out of control.

What are the parts of skin?

There are several layers of skin.1 The top (outer) layer is called the epidermis. Three types of cell in the epidermis are:2

Figure 1. The layers of skin 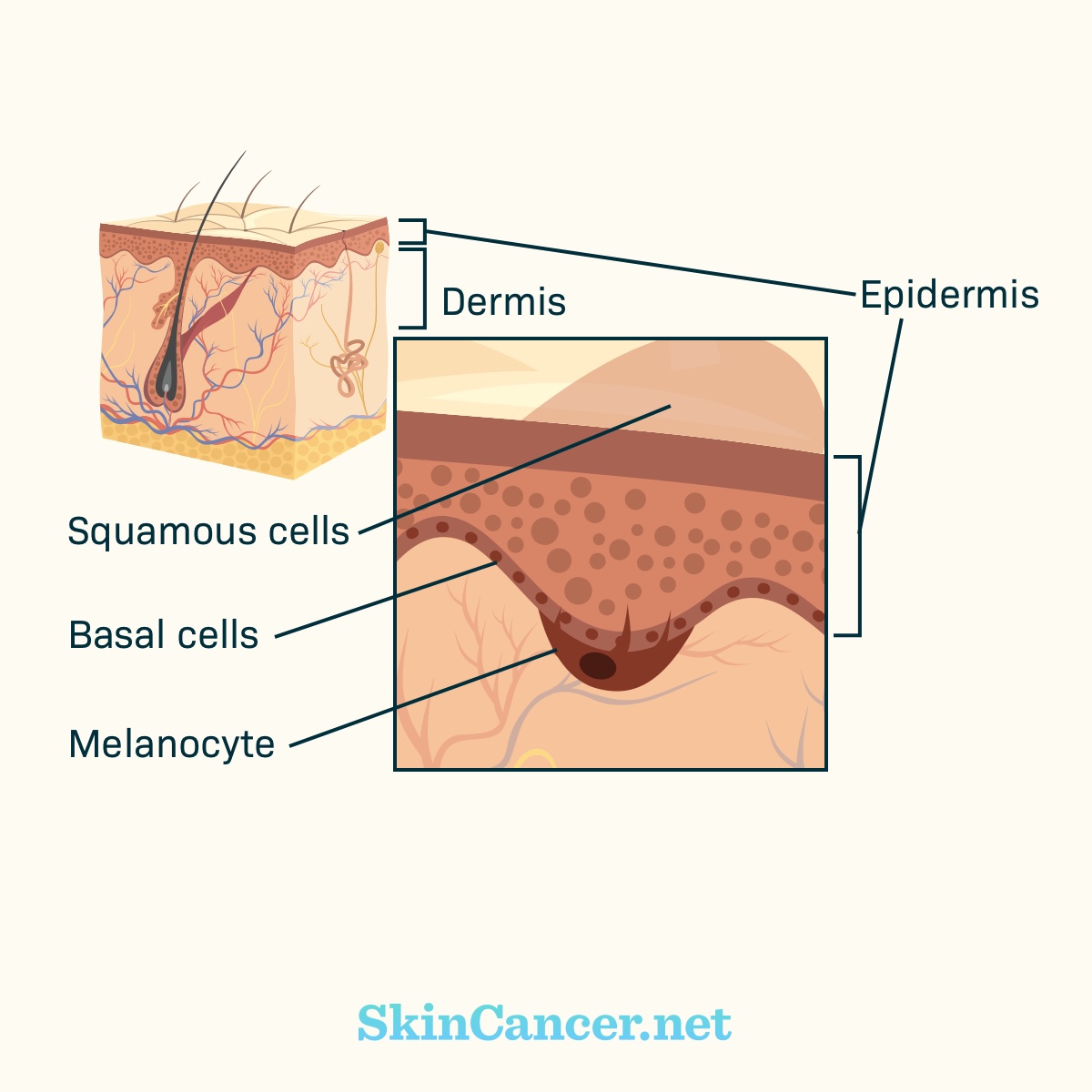 Squamous cells make up the top layer or outermost cells. They have a flat shape and they flake off as new cells form. Most of the lower part of the epidermis is made of basal cells. Basal cells move upward as they divide and eventually become squamous cells. Melanocytes are cells that make a brown pigment called melanin. Melanin gives skin a tan or brown color. When skin is exposed to sun, these cells make more melanin. The basement membrane separates the epidermis from deeper layers of skin. The deeper layers are the dermis and subcutis.

The word “cutaneous” means affecting the skin. This term is used to specify that a cancer is skin related, especially when it is a type that can develop in other parts of the body. Examples include “cutaneous squamous cell carcinoma” or “cutaneous lymphoma.”

The most common type of skin cancer is basal cell carcinoma (BCC). BCC often develops on the parts of the body that get the most exposure to sun.2,3 Specifically, 85% of BCC is found on the head or neck.4 The nose is a very common place for BCC. About one quarter of BCC tumors occur there.4

Ultraviolet (UV) rays from the sun or tanning beds can damage the DNA in skin cells.2 DNA changes, called genetic mutations, can lead to uncontrolled cell growth. The most important genetic changes in BCC are:

Four out of 10 BCC tumors have changes in a gene called PTCH1.3 PTCH1 is known as a “tumor suppressor gene.”2 It is a type of “off switch” that helps cells grow at a normal rate.2 If PTCH1 becomes mutated, the off switch no longer works. The result is uncontrolled cell growth. TP53 is another tumor suppressor gene that is mutated in almost 40% of BCC tumors.3

Another fairly common mutation in BCC occurs in the SMO gene. SMO is known as an “proto-oncogene” or a type of gene that helps cells grow, divide, and stay alive.2,5 When SMO becomes mutated, it is constantly “on.” SMO is mutated in about 12% of BCC.3

BCC grows slowly. If it goes untreated for a long time, it can grow into nearby areas. However, this type of cancer almost never spreads to distant parts of the body (metastasizes).2-4 This means that BCC can be treated and removed, usually with relatively minor surgery or local treatment.2,3

UV rays that damage the DNA contribute to SCC.2 The specific mutations that lead to some cases of SCC is an area of ongoing research.2 Scientists hope that this research will lead to new treatments that target certain mutations.

These mutations might explain why certain risk factors lead to melanoma in some people but not others.8 For example, most moles do not turn into melanoma, but some do.8 The frequency of each mutation is different in melanomas occurring in various parts of the body. For example, BRAF mutations are found in 10% of melanomas that develop on sun-exposed skin, and in 50% of melanomas that occur in unexposed skin.7 Discovery of these mutations has led to new treatments for melanoma.

The spread of cancer cells from the original skin tumor to other parts of the body is called metastasis. Melanoma cells spread via the lymphatic system. Lymph is a fluid that contains white blood cells.9 Lymph travels through the body via lymph vessels. Lymph nodes are clusters of cells that filter the lymph, removing bacteria and other harmful substances. Once melanoma has grown into the dermis, it can enter the lymph vessels.10